Plenty of us depend on a caffeine power up to give us extra life throughout the day. Taking a sip from the Game Boy Heat Change Mug gives you an energy boost and a warm cup of nostalgia at the same time.

Featuring the same layout as the original Nintendo Gameboy (including the speaker grille), adding any hot beverage "turns on" the screen to reveal an image of Mario and Daisy in Super Mario Land.

With cell phones in every purse and pocket, it's hard to remember just what a game changer the first popular portable game console was. But the Game Boy Heat Change Mug will take you back and warm your heart with Mario Land memories as your morning coffee warms it up. Pour in a hot beverage, and it's like sliding that switch on top and watching the monochrome screen power up.

Batteries not included (or needed).

The mug has identical permanent images of a game boy a quarter turn from the handle in each direction complete with D-pad, action buttons, speaker grille, and a blank screen.

But when you fill the mug up with something hot, you'll find that the two screens show different points in Super Mario Land: one side reveals the start screen while the opposite side shows the meeting of Mario and Daisy in World 1-3. 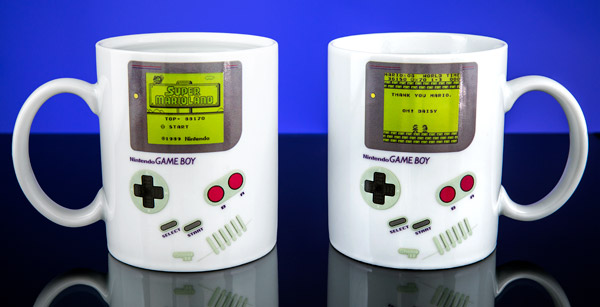 Question: What game is on the screen?

Answer: Super Mario Land, which was included with some Game Boys!

Question: Does it actually work?

Answer: The cup actually holds coffee and it actually changes what's on the wall when you add a hot liquid, but it's not a playable Game Boy.

Super Mario hand puppet plant with a taste for plumbers.

The half gallon humorous mug.