Fill your room with a swirl of dazzling rainbows. A pair of Swarovski crystals act as dispersive prisms, refracting sunlight into a bountiful scattering of rainbows across the walls, ceiling, and floor of your room.

This solar-powered device turns a collection of colorful gears which spin the crystals in opposite directions.

Affix the Double Rainbow Maker to any window using the included suction cup or hang it from string using its molded hooks.

Double rainbow all the way!

What does this mean?! It means that you can enjoy a far-out double rainbow experience anywhere you have access to sunlight.

The solar-powered Double Rainbow Maker uses a pair of Swarovski crystals to cast mini rainbows all over your room. A set of colorful gears slowly spins the crystals to create a soothing dance of refracting sunlight. 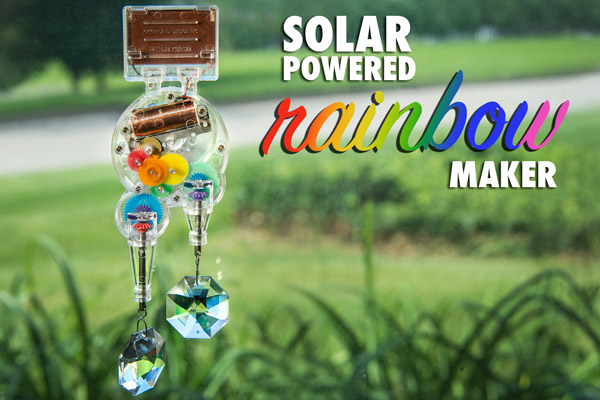 Stick the Double Rainbow Maker to any window for an indoor rainbow light show!

For a ticket to the rainbow light show, simply suction cup the Double Rainbow Maker to any window which receives direct sunlight.

A solar panel on the top of the Double Rainbow Maker powers a small motor attached to a set of colorful gears. The gears spin the crystals which disperse sunlight around the room. 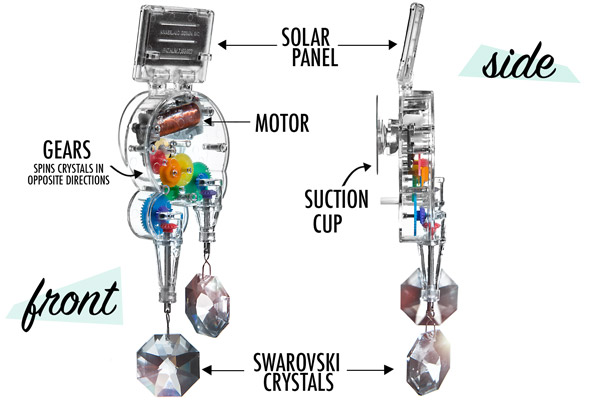 Bathe your room in a scattering of colored light

The Double Rainbow Maker's crystals act as dispersive prisms, refracting sunlight into dozens of miniature rainbows that slowly swirl around the room. It's like a chilled-out version of a disco ball. 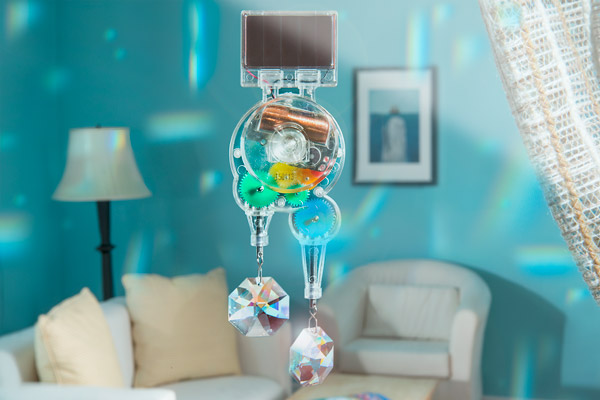 The Double Rainbow Maker creates a swirling display of rainbows in any room.

Question: How many batteries does it require?

Answer: None! It's solar-powered. Simply place it on a window that receives direct sunlight to enjoy the show.

Question: Does it project exactly two rainbows on my walls?

Answer: No. The Double Rainbow Maker covers your room with light in a similar way to a disco ball. However, instead of patches of solid white light, the Double Rainbow Maker's light show is made entirely of rainbow-colored swatches of light. Additionally, each crystal spins in opposite directions to enhance the effect.

Answer: Until the sun burns out!

Trick greeting card with 3+ hours of looping music and a hidden glitter bomb.

Colorful markers that won't dry out!

Wrap your real gift in a hilarious fake gift box.