Pre-game in 8-bit style and sneak a Game Cartridge Flask under your acid wash jean jacket.

Each plastic flask is shaped like a Nintendo Entertainment System cartridge and features an unlicensed punny name like Bar-Hop Bros. or Drunk Hunt with an original label design to match.

With a five ounce capacity, you can play all of your favorite drinking games and even share some with Player 2.

Press START and open the stopper

A single-player flask should be two things: discreet and portable. At four inches wide and less than an inch deep, Game Cartridge Flasks have easy transportation down pat.

And, at first glance, friends and strangers alike will mistake your Bar-Hop Bros. or Drunk Hunt cartridge for a vintage video game… until they see you take a sip. Be prepared for a multi-player quest. 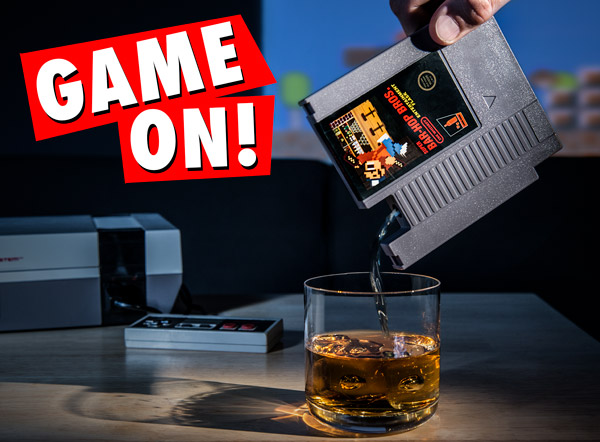 You don’t even have to blow into it to make it work!

Game Cartridge Flasks replicate the look and feel of an actual Nintendo Entertainment System game cartridge with their similar shape, color, sticker label, and even indented grooves. Both styles of flask even include a gold seal that reads “you can put your booze in it!” 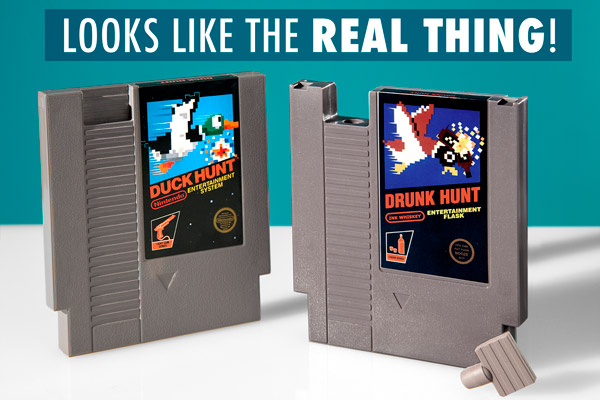 If you weren’t sipping from it, it could be mistaken for an actual video game.

Game Cartridge Flasks are just a hair off from the dimensions of a playable NES cartridge, making them super portable. But without a microchip inside, you can port around five ounces of the hard stuff. Carry it in your back pocket or jacket to take a powerup with you wherever you go. 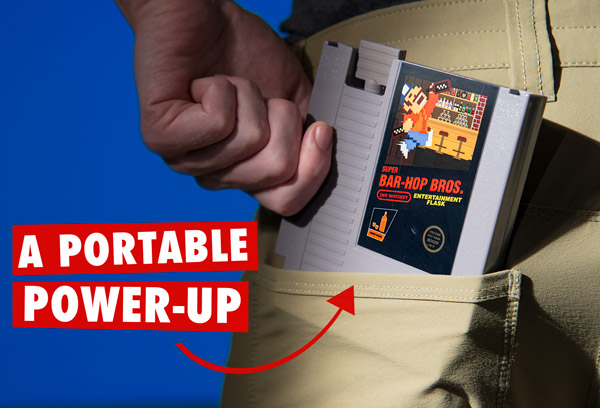 Game Cartridge Flasks are currently available in two different styles: Drunk Hunt, a clever pun on the digital Zapper challenge Duck Hunt, and Bar-Hop Bros., a send-up of the most popular NES game of all time and beloved plumbing simulation franchise.

Press select or go for an A, B combo!

Question: Can I put soda (or some other liquid in it)?

Answer: Of course! If it helps, think of it as a portable cup that happens to look like a vintage video game cartridge.

Question: Can I insert this into a Nintendo Entertainment System?

Answer: We don’t recommend it. It’s not going to fit, and besides, shoving liquids into electronics usually doesn’t end well. But congrats on still owning a working NES!

An insulated cooler that floats!