There’s little doubt that Han Solo is the coolest character in the Star Wars universe. And the only thing cooler than cool is frozen. With Han Solo ice cubes, you can relive the iconic moment Han Solo stood face-to-face with Darth Vader and defied the Empire every time you take a sip.

Fill up the reusable silicone tray, pop out the nine identical Han Solo ice cubes, and smuggle them into your beverage. Then raise your glass and drink to the loveable rogue who made the Kessel Run in 12 parsecs.

The best part of the best Star Wars movie culminates when Han Solo and the rebel forces confront Darth Vader on Bespin, resulting in Han’s willing self-sacrifice. What better way to honor the galaxy’s scruffiest-looking nerf herder than plopping nine ice replicas in a tall glass of awesome?

Your silicone mold is Jabba’s dream, including space to make nine identical Han Solos at a time. 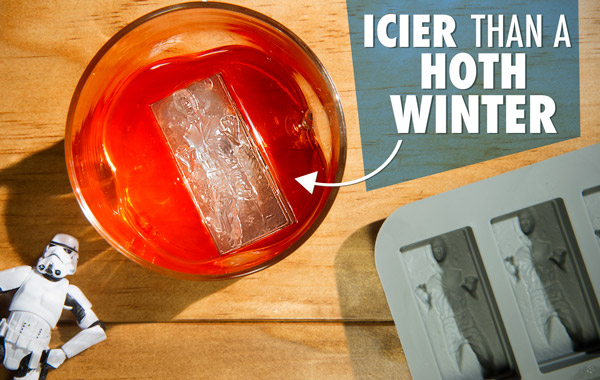 Grab carbonite cubes for your next Mos Eisley mixer.

If you’ve got something as awesome as a tray of Han Solos, you’re going to want to freeze more than mere ice. Luckily, you can!

Smuggle sweets like chocolate or Jell-O into the mold for an out-of-this-world treat and let them melt in your mouth, freeing the fantastic flavor.

I’ve got a good feeling about this.

Question: I love these!

Question: Does the rate or freezing or thawing differ from ordinary ice cubes?

Answer: Han Solo ice cubes will thaw at approximately the same rate as a similarly sized ice cube. The detail will probably be the first thing to melt away, though.

Umbrellas made with a real beer tap handle for a grip.