A fun and safe competitive strength and balance challenge. Get ready to choose an awesome name like Laser or Turbo, strap on your leotard, and joust like a gladiator champion with the Inflatable Balance Jousting Set.

This boppable battle set creates a safe arena for combat that works your core strength, balance, and coordination.

Each competitor stands atop the blue and red platforms provided. While remaining standing and challenging your balance, grab your coordinating inflatable pugil stick by the handles and duel your opponent!

Whether you play indoors or out, win or lose, each friendly challenge is sure to end in plenty of laughter… and a call for a rematch!

Take the thrill of up-close combat and throw out the danger when you challenge a friend with the Inflatable Balance Jousting Set.

Pick up the two-handled inflatable pugil stick, step onto the balance platform, and fight! Duck, weave, thrust, and parry with your vinyl weapons as you try to maintain balance on your teetering platforms.

In your melee madness, you'll notice a couple of things: getting hit with an air-filled tube ain't so bad, keeping your balance atop a teetering platform is tough, and finally, this thing is really, really fun! No matter who comes out on top in this bout, there's always another

When people fight, you expect they'll get hurt. But not so with the Inflatable Balance Jousting Set. The sparring set is an opportunity to act out aggression without harm.

Since the jousting sticks are air-filled, they're even less impacting than feather pillows. And the striking areas are covered in a flocked material that makes it feel like you're being caressed by velvet with every hit. So feel free to fight an entire tournament's worth of friendly foes, and everyone will go home without so much as a bruise! 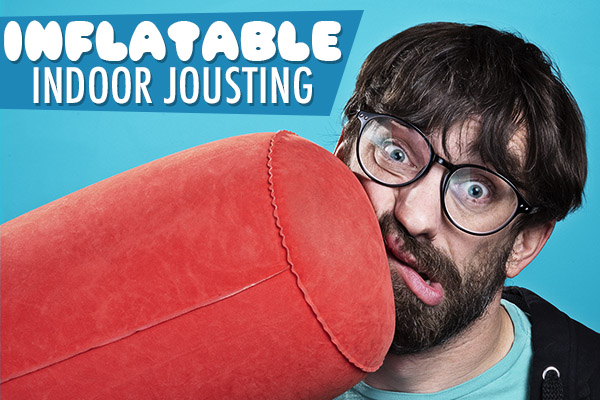 The only thing hurt here is his pride. 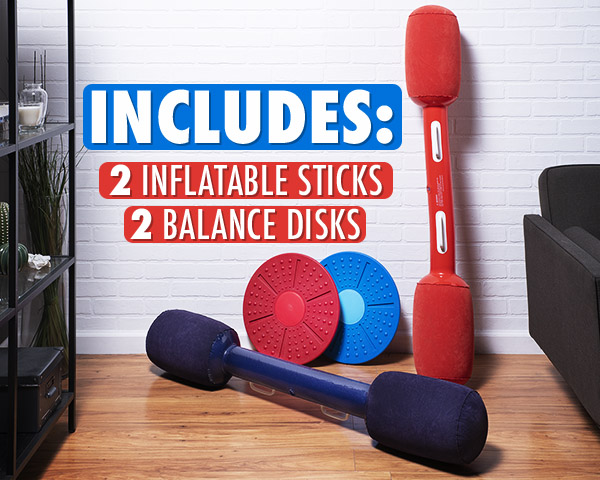 Includes everything you need to get boppin'!

Question: Is there a weight limit?

Answer: The Inflatable Balance Jousting Set's platforms are rated to hold 300 lb each.

Question: Is this for indoor or outdoor use?

Answer: We're not going to force any rules on you, so as long as you're having fun with a hard enough surface to use the balance boards and enough space around you to not break anything, feel free to use the Inflatable Balance Jousting Set wherever you'd like.

Add water to make snow in an instant!

A tiny handheld console version of the classic video game.