Jabberin' Jack: A Halloween pumpkin with an animated face that really talks!
Valentine's Day is coming! You can still get your order in time! Click here for more details.

A Halloween pumpkin with an animated face that really talks! Take your Halloween decor to new haunted heights with Jabberin' Jack, a jack-o-lantern that can really talk! At first glance, this gourd looks like a perfectly plain pumpkin appropriate for a festive fall centerpiece. But plug it in, and the pumpkin’s face comes alive, singing songs, telling jokes, and even making spooky threats.

Choose between three different personalities (Spooky, Traditional, and Goofy), and Jabberin' Jack will transform its face and entertain you with over 70 minutes of animated amusement. Don't worry; it's not cursed.

A short-throw projector and an integrated speaker make for a plug-and-play pumpkin that will delight and fright all of your trick-or-treaters. When you've got a talking pumpkin like Jabberin' Jack on your porch, you'll be the talk of the whole neighborhood and a destination for spooky Halloween fun. 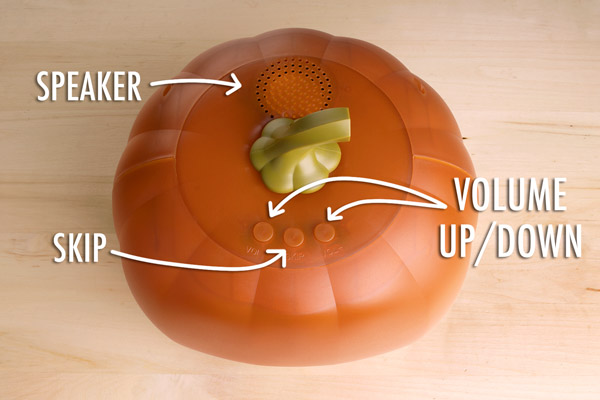 Change Jack's personality with the push of a button. 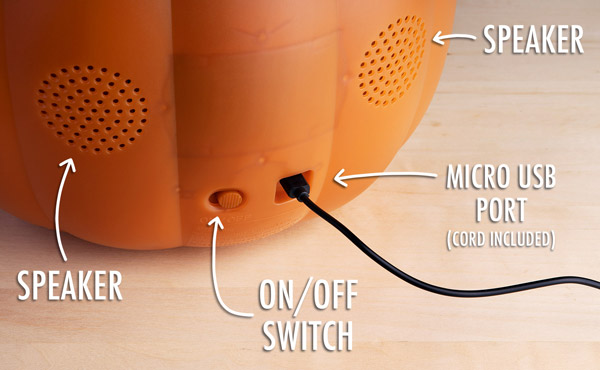 A pumpkin with plural personalities

Jabberin' Jack is an amazingly dynamic piece of Halloween decor, but he's even more variable than you'd think at first glance. This spooky speaking squash actually features three different personalities, each with their own voice, phrases, and facial expressions.

Classic Jack features the prototypical pumpkin face and the kind of jovial jokes that make the harvest season fun for everyone.

Jacqueline's menacing witch-like threats and aggressive face will send shivers down your spine for a truly haunted Halloween.

And Jack-O's goofy grin and affable personality complete with silly songs will have little ones laughing their way to early enjoyment of the spooky season.

This singularly special pumpkin can customize its personality to all ages to make Halloween a frightfully fun time. 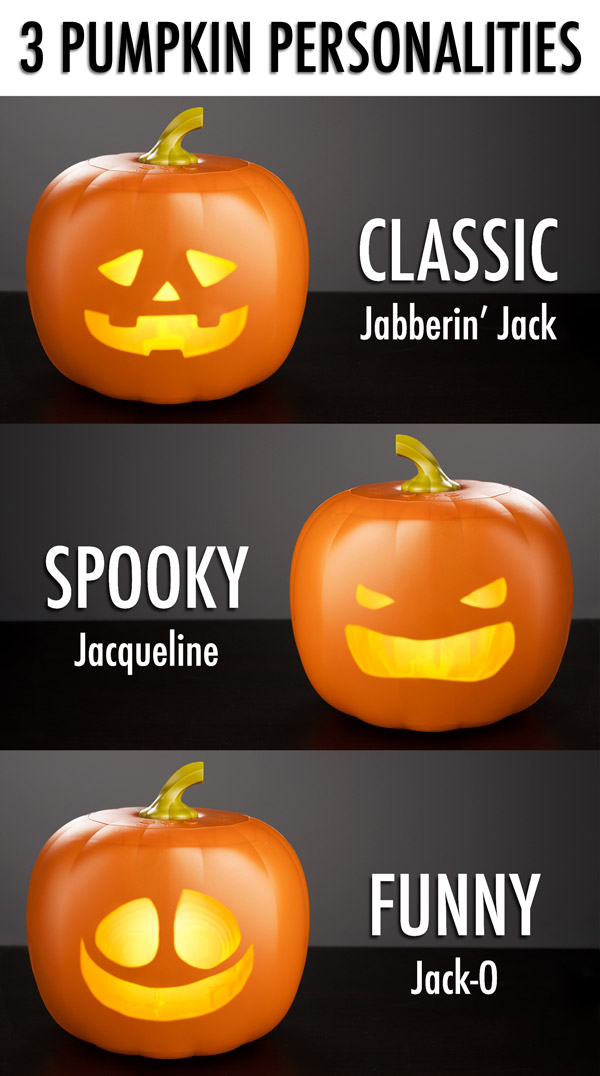 This pumpkin has three distinct personalities.

Jabberin' Jack is so eye-catching, people who encounter him will want to stick around to observe for a little while. Luckily, he's ready to entertain with over an hour of animations, songs, jokes, and phrases.

Each character has 3 built-in songs and over 40 jokes and phrases as well as making ​​silent faces. Your front porch will be the talk of the neighborhood, and Jabberin' Jack will chime right in. 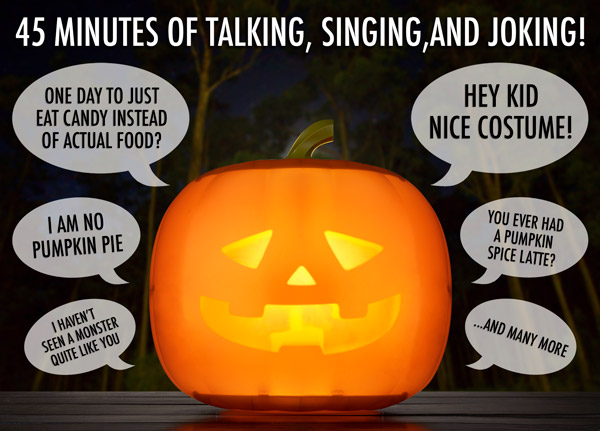 Trick-or-treaters will be treated to a unique phrase from your one-of-a-kind decor.

Question: But what if I don't have a plug where I want to use it?

Answer: The USB-A cable used to power Jabberin' Jack can also plug into a rechargeable battery pack for a perfectly portable pumpkin.

Question: Can I get three pumpkins and have them talk to each other?

Answer: No, multiple Jabberin' Jacks are not designed to interact with one another or directly with people. You may have seen videos on the Internet where this is happening, but those are fake, and Jabberin' Jack is not capable of responding to other Jacks or of singing in chorus.

Creepy animal masks that move when you talk!