Rocket Ferrofluid Lava Lamp: A rocket-shaped lamp filled with magnetic fluid.
Valentine's Day is coming! You can still get your order in time! Click here for more details. $99.99
Sold Out (more Feb. 28)
FREE SHIPPING
Email Me When Back In Stock
— or —
Buy Now at Amazon
Note: The product details shown on Vat19 (including price) may vary from what is available at the store(s) above.
+ Add to Wishlist

Take your decor to new heights with the out-of-this-world Rocket Ferrofluid Lava Lamp.

This retro-futuristic display is similar to the famous lava lamp; only the grooviness has been replaced by scientific fascination. Instead of mere colored wax, the lamp contains black ferrofluid, an amazing liquid teeming with magnetic particles. Use the included magnets to manipulate the weird substance to make it jump, dance, and swirl inside the glass.

If you prefer a more hands-off approach, watch the ferrofluid formulate droplets that rise and fall in the lamp’s transparent liquid. It creates a hypnotizing display that will draw your gaze with its odd beauty.

Warning: This product is designed for US 110/120V outlets only!

Two things permeated the culture of the '60s: the groovy lava lamp and an obsession with the space race. Those cultural touchstones are combined in a fun and fascinating way with the Rocket Ferrofluid Lava Lamp. Resembling a retro-futuristic spaceship, this intriguing bit of illumination takes the nostalgic and makes it modern with the addition of ferrofluid in place of the wax.

Like a wax lava lamp, the strange substance heats up and flows in hypnotizing patterns inside the glass cylinder. The cool and curious nature of the display fits the sleek design of the lamp to create a decidedly unique accent piece. The light in the bottom of the lamp emits a soft amber glow that accents the black shapeshifting ferrofluid inside. Sit back and watch the black blobs pirouette in the transparent liquid or grab the magnets and move them yourself!

Science just got far out.

Exploring the weird and wonderful

The Rocket Ferrofluid Lava Lamp is a striking desktop decoration that also contains a mesmerizing desktop distraction. In fact, ferrofluid is so amazing, we sell it as its own toy!

Ferrofluid is imbued with incredibly small iron particles that react with magnets to create fascinating interactions. Use the included rare earth magnets to make this otherworldly substance move in myriad ways within the lamp. 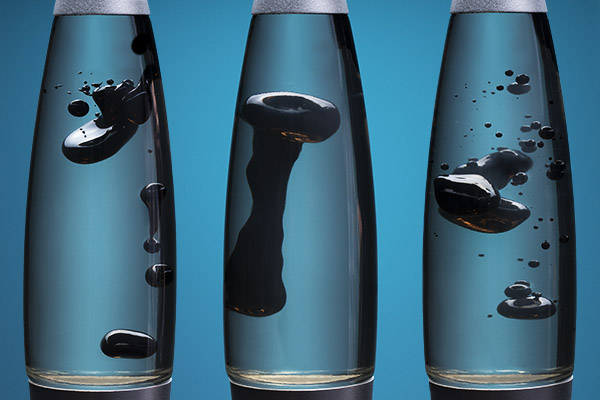 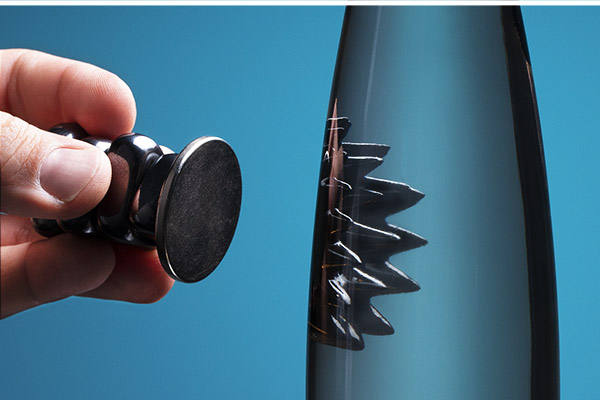 It's a magnetic lava lamp!

Rather than liquid hydrogen, this rocket-shaped lava lamp is powered from the safe electricity in the grid. And the boss-level bewitching is boosted with an included set of magnets for you to manipulate the ferrofluid within. 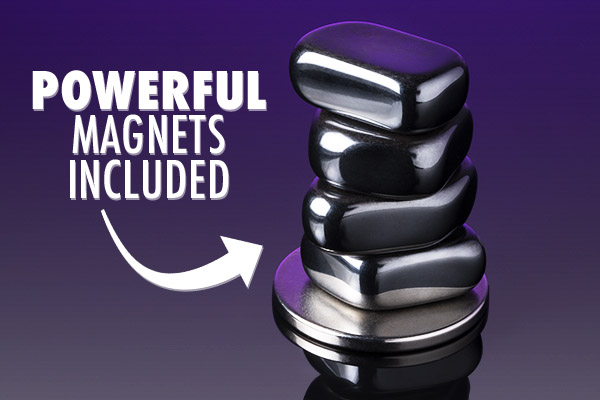 Question: Is there a version for British plugs?

Answer: Unfortunately, the Rocket Ferrofluid Lava Lamp is only available for American-style outlets.

Question: Will it light up a room?

Answer: The Rocket Ferrofluid Lava Lamp is more of a mood lamp and an interactive display than a practical illumination source.

Sorry! We're sold out until February 28.

Ferrofluid in a Bottle

The amazing liquid that reacts to magnets.