Carolina Reaper Peppers: One of the world’s hottest pepper.
Valentine's Day is coming! You can still get your order in time! Click here for more details.

One of the world’s hottest peppers 🔥 🌶. If you consider yourself a chilihead or just have a fascination with extreme heat, it’s time to let your tastebuds battle one of the kings of spice. The Carolina Reaper scorches the Scoville scale at 2.2 million units—that’s 220 times hotter than a jalapeño!

Each package contains a single, whole, dried Carolina Reaper Pepper. Dare yourself to take a bite out of this bad boy and, if you survive, challenge a friend to do the same. It may be painful, but you’ll have the satisfaction of knowing you beat the beast.

When you’re one of the world's most painful peppers, you don’t need fancy packaging. The Carolina Reaper Pepper is presented unadorned. There are no directions or accessories. There's merely a small transparent box containing one of the spiciest peppers known to man. Jason Vorhees didn’t need an elaborate costume either.

The pepper has been left whole—seeds and all—and dried for preservation. The resulting wrinkled pepper looks like something alien and very dangerous. 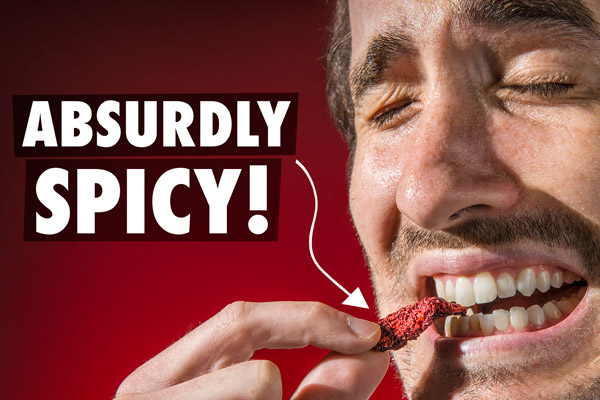 We’re not lying when we say that this thing is crazy hot—we have proof!

According to the Scoville scale (the definitive rating system in the spice world), the Carolina Reaper Pepper is around 220x hotter than a jalapeño. And this isn’t just a snack sprinkled with spice; this is the straight-up pepper in all its evil glory. So slice off a sliver to experience the heat. Trust us, a little bit goes a long way. 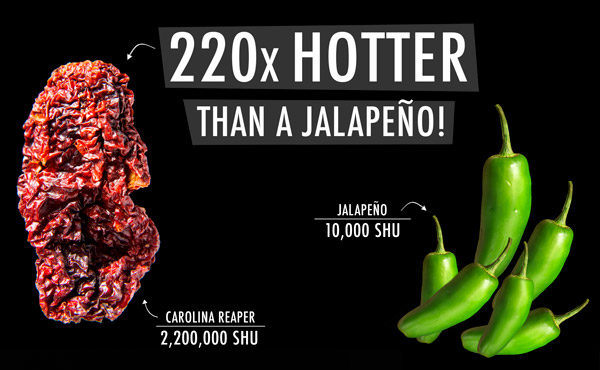 Question: Is this dangerous?

Answer: Like all extreme spicy products, the Carolina Reaper Pepper needs to be handled carefully and used in moderation. We recommend washing your hands after touching it and keeping it away from children and pets.

Question: How big is it?

Answer: Each pepper is approximately 1.75” long. This will vary somewhat by pepper.

Question: How many are in a package?

Answer: There’s one whole Carolina Reaper Pepper in each package. It’s like dropping an atomic bomb of spice—anything more than one is just overkill.

Can you finish the hottest peanuts on the planet?