Add a hot beverage to reveal the classic SEGA game. Relive your 90s glory with this homage to the game that put SEGA on the map.

Our Sonic the Hedgehog Heat Change Mug reveals a scene from the iconic console game whenever you pour a hot drink into it.

The stoneware mug features a 10-ounce capacity and is officially licensed by SEGA. A colorful and lush screenshot from the classic "Green Hill Zone" is shown on both the front and back of the mug.

Fire up the classic platform game

Give Sonic and Tails a chance to stop the egg-shaped madman Dr. Robotnik from stealing the chaos emeralds with a hot beverage.

When the mug is at room temperature in your cupboard, it displays a television, SEGA console, and the word “GAMER”. Add a hot drink, and the television turns on to reveal Sonic in the Green Hill Zone. With the same scene on each side of the mug, you’ll always have a good view of the action. 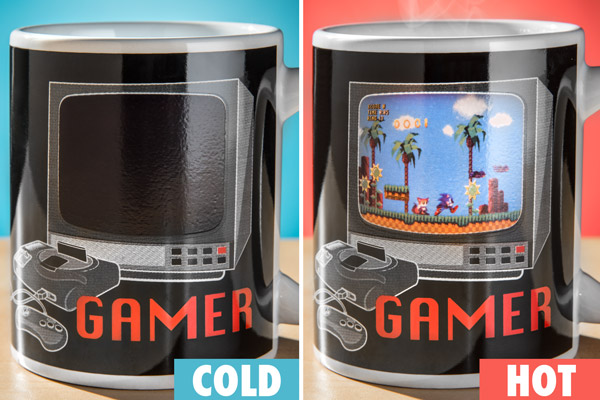 Pouring in a hot drink is like collecting 100 rings.

SEGA has officially licensed the Sonic the Hedgehog Heat Change Mug, so it depicts real artwork of the real characters in a real game level.

This isn’t some knockoff Sconik the Porcupine mug. Just like the Tetris Heat Change Mug, this cup is licensed by people who made the game for people who enjoy the game. 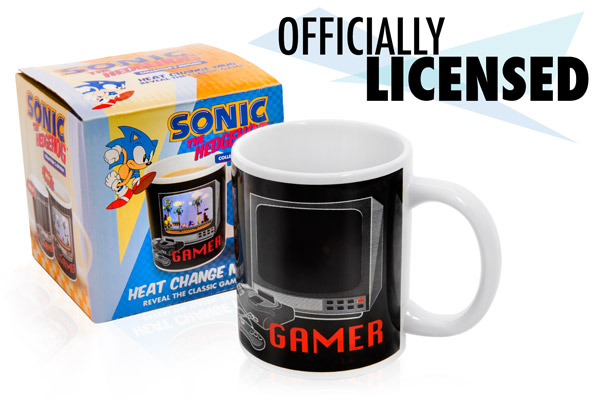 The collector's edition mug is officially licensed by SEGA.

In addition to being a portable monument to SEGA’s flagship game series, the Sonic the Hedgehog Heat Change Mug doubles as a container for hot beverages. The ceramic cup can hold up to 10 fl oz of your favorite coffee, tea, or other warm drink. 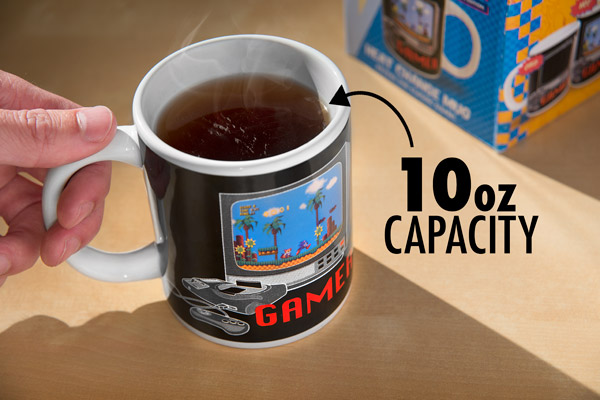 Since you’re filling it with hot liquid, Sonic holds off on his trademark spin dash.

Question: Can I play the game with the mug?

Answer: No, the mug is not a game console.

Question: How fast does it change?

Answer: The mug should continue to show the scene from the Green Hill Zone indefinitely. However, since it only appears when the surface of the mug is hot, it will only last for as long as your beverage is hot, which at room temperature is about 30 minutes.

Answer: The back and front have the same heat-sensitive image printed on them.

Question: Can I use it in the dishwasher and microwave?

Answer: No. To preserve the thermally sensitive glaze, the mug should be hand washed and never nuked.

Answer: While the scene fades in and out with the change of temperature, the image isn’t animated. Think of it as an in-game screenshot.

An assortment of solid sweets that taste like a variety of brews.