Some people would say that a piece of solid gummy weighing nearly three pounds and measuring over two feet long is such an excessively absurd (and delicious) tube-shaped treat, you couldn't possibly add to it. Luckily, we don’t listen to these people.

This colossal candy is infused with a supremely sour flavoring and is then coated with a sugary sour dust to add extra flavor to its base of fruity gummy goodness. The sour blends with the sweetness of the gummy to make a delicious duo of gigantic proportions.

Coming in at 128 times the size of a normal gummy worm, this eye-popping treat is fun to pass around and share whether you get it for yourself or give it as a gift to a sweet and sour craver.

Sour gummy worms have been a favorite convenience store treat for many a road trip. Now you can get that treat supersized… and then some!

The World’s Largest Sour Gummy Worm is made with the same high-quality gummy as the original worm with a tad more tartness. The sour flavoring isn’t like biting into a lemon; rather, it complements the worm’s fruity sweetness to add flavor complexity to your candy. 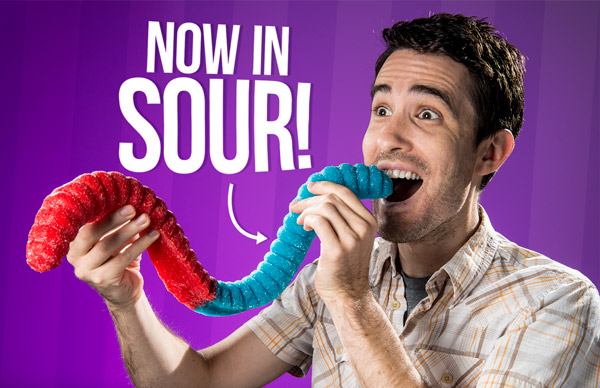 More of a smile than a pucker.

When you’re sour-ifying the biggest gummy worm in the world, you need more than a sugar-sour coating to get the job done. That’s why the World’s Largest Sour Gummy Worm is packed with sour from the inside-out and the outside-in. The gummy itself is infused with the sour flavor so even bites without the coating will still have that extra sour kick. 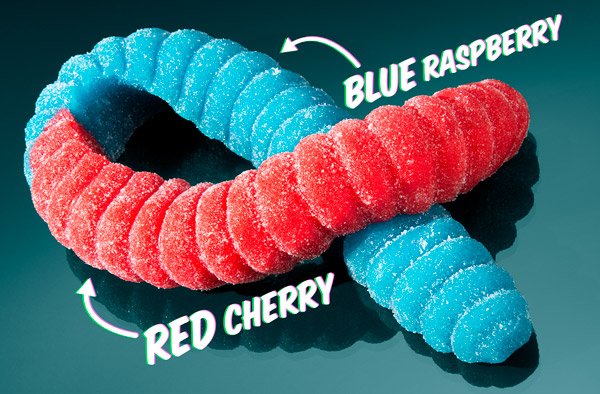 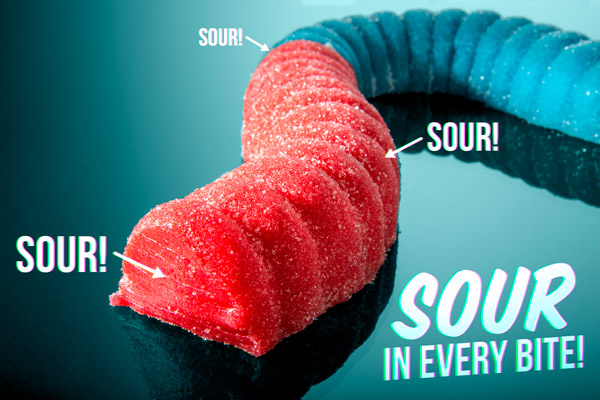 If you’re gonna go sour, do it right.

Whether you buy it to give as a gift or to treat yourself, three pounds of solid gummy is certain to impress whoever ends up with it. This gratuitously gargantuan gummy measures over two feet long and contains more than 4,000 calories (which also makes it a fun candy to share with friends). 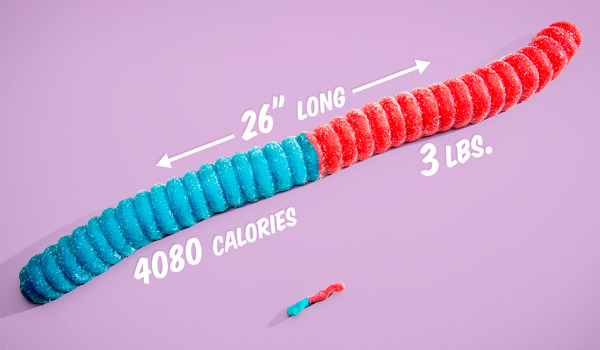 Jon and Joey, members of the Vat19 video team, take a first look at this sour beast.

Question: So how sour is it?

Answer: The World’s Largest Sour Gummy Worm isn’t a strong, puckery kind of sour. We thought it was pretty similar to a Trolli sour worm but, like, a million times bigger.

Question: Is this just a World’s Largest Gummy Worm dipped in sour sand?

Answer: The Sour World’s Largest Gummy Worm uses the same base gummy as the regular WLGW, but infuses it with sour and coats it with sour particles. Yum!

Giant Gummy Bear ... on a Stick