The Giant 3-Pound Gummy Worm is 128 times more massive than a traditional gummy worm. Measuring twenty-six inches long and weighing in at approximately 3 pounds, this goliath is the most delicious 4,000-calorie candy worm in existence.

Each Giant Gummy Worm features dual flavors, a ribbed body, and a five inch girth. It makes an amazing gift for now or later due to its year-long shelf life. Handmade in the USA. Available in seven flavor combinations.

Gummy Worms are delicious. But they're small. When you really need to get your gummy worm "fix", there is no substitute for the Giant Gummy Worm.

Weighing in at three pounds, it is 128 times bigger than a traditional gummy worm. BAM! 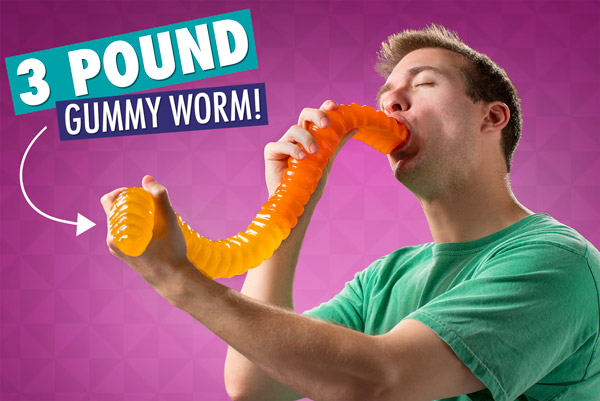 This Giant Gummy Worm is yours to be devoured.

We're not kidding. It's huge.

The Giant 3-Pound Gummy Worm boasts an impressive 5-inch girth and packs a walloping 4,000 calories into its 26-inch-long frame. Dang. 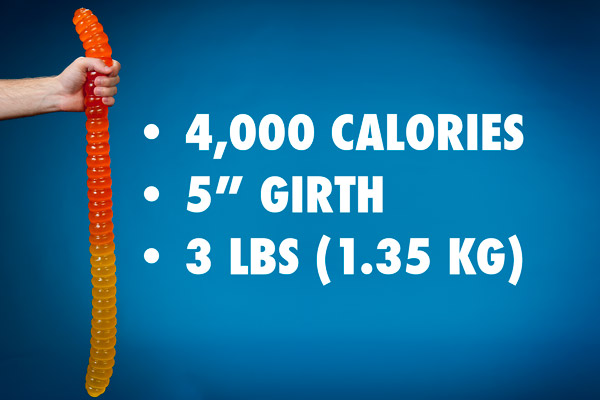 The Giant Gummy Worm is the world's largest and packs 4,000 calories into its 3-pound body.

As I'm sure you'll remember from geometry class, the volume of a cylinder is represented as πr2h.

With a radius of approximately 0.75 inches and a height of 26 inches, the Giant 3-Pound Gummy Worm is 46 cubic inches of candy. Blend that down and you've got yourself a 0.75 liter gummy shake. Sugary!

A regular gummy worm is approximately 128 times smaller than our Giant Gummy Worm.

There are two distinct methods of GGW consumption:

Which method you employ depends on your mood and how highfalutin you're feeling. If you're hosting visiting royalty, we suggest your finest silver platter and sharpest carving knife.

Keep in mind that the Giant Gummy Worm has a shelf life of approximately one year, so there's no rush to devour the entire worm in one sitting. 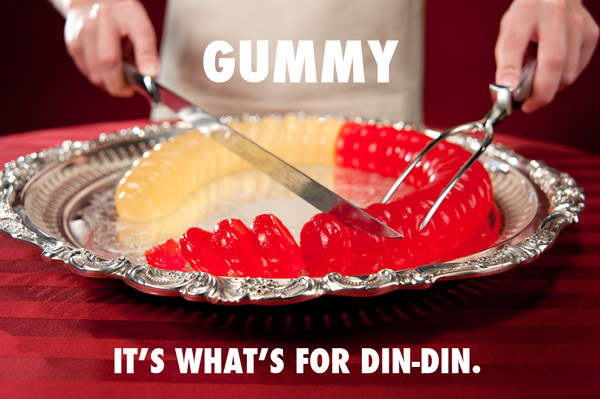 The worm's ribbing acts as a perfect slicing guide for large group sharing.

All the same details as a regular gummy worm

The Giant 3-Pound Gummy Worm, like its smaller cousin, features a ribbed body and a cute little smiley face. We suppose it's important to know if you're snacking on the head or the tail.

The Giant 3-Pound Gummy Worm features the same details (albeit on a grander scale) as a regular gummy worm.

A dirt cake may sound unappetizing, but it's actually quite the opposite. Here are the ingredients: chocolate pudding, crushed Oreos, and gummy worms. Soooo good.

With the GGW, you can create a monstrous dirt cake capable of feeding a small army. 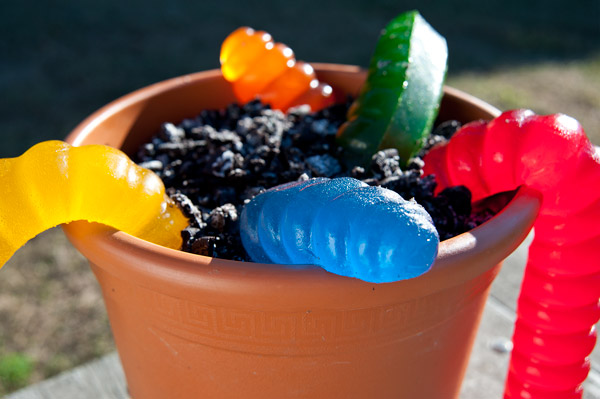 We're not going to sugarcoat this: The Giant Gummy Worm is not very good for you—unless you suffer from a disease whose only cure is three pounds of delectable gummy.

Like any delicious dessert, simply enjoy the worm in moderation. It has a shelf life of over a year, so there's no rush.

Below is a table of nutritional information to confirm that the Giant Gummy Worm is, in fact, not as healthy as 3 pounds of veggies.

Available in a variety of dual-flavor combinations

The Giant Gummy Worm is available in the following flavor combinations:

Question: If you cut the worm in half, will it form two new worms?

Answer: No, but that would be awesome.

Question: Is this product for real?

Answer: YES! The Giant Gummy Worm is 100% real. It is made in the USA and we have a warehouse full of them ready to send to you. In fact, we also have Giant Gummy Bears on a Stick, the 5-Pound Gummy Bear, and Gummy Shot Glasses.

Answer: The Giant Gummy Worm has a shelf life of approximately one year. We suggest keeping it out of direct sunlight and excessive heat.

Question: If I froze it with liquid introgen and dropped it, what would happen?

Answer: Excellent question! Check out the videos below for the answer to this question (and many more!).

Answer: You can check out our 5-Pound Gummy Bear or you can purchase several worms (hint, hint).

Question: Is it kosher? Vegan? Gluten-free?

Answer: No, it is not kosher. No, the gelatin is derived from a pork source. Yes, it is gluten-free!

Question: How is it packaged?

Question: If I bought 128 Giant Gummy Worms, how big would that be?

Answer: We're so glad you asked! Check out the video below for the answers.

A sweet gummy treat shaped like a human tongue.

An enormous version of the beloved milk chocolate drop.