$39.99
Sold Out
FREE SHIPPING
Email Me When Back In Stock
+ Add to Wishlist

Exploring the invisible world of magnetism is just one of the reasons Spinning Magnetic Orbs are so difficult to put down.

Each orb is a transparent plastic shell with a pair of gimbal-mounted rare earth magnets nested inside. The system allows the magnets to respond to magnetic fields independent of their casing, mimicking magnetic properties on an atomic scale, while allowing you to see the mechanism at work.

Despite their small size, the powerful magnet inside the Orbs can interact with magnetic fields up to a foot away. Educational and entertaining at the same time, Spinning Magnetic Orbs enable you to investigate the magnetic world in new ways.

To get you started, the set also comes with two hollow proxy spheres which each contain a free ball magnet inside. Watch how the spheres interact with one another or with the proxy spheres and magnetically attracted objects around you. Spin them, slide them, collide them, and glide them for a result that's fascinating and fun at the same time.

An excellent gift for the engineer or scientist in your life, the set includes two Spinning Orb magnetic spheres, two magnetic proxy spheres, and a wooden display stand.

If you’re anything like us, you might take a look at this image and think, “What the H?” What’s happening here is fascinating, but it doesn’t break any known physical laws.

Each Spinning Magnetic Orb is a pair of strong magnets mounted in a gimbal that allows them to spin while the transparent shell that houses them remains still.

The magnets have freedom of rotation both up and down and side to side.

Take them for a spin

A look inside the transparent shell reveals two different rare earth magnets, one gray and one yellow, mounted inside a set of nested gimbals.

The different colors of magnets represent the positive and negative poles of the system, and the rotating gimbals allow the magnetic pair to freely rotate 360º about each axis simultaneously. You can watch the magnets interact as if they were suspended in space even when you’re holding them! 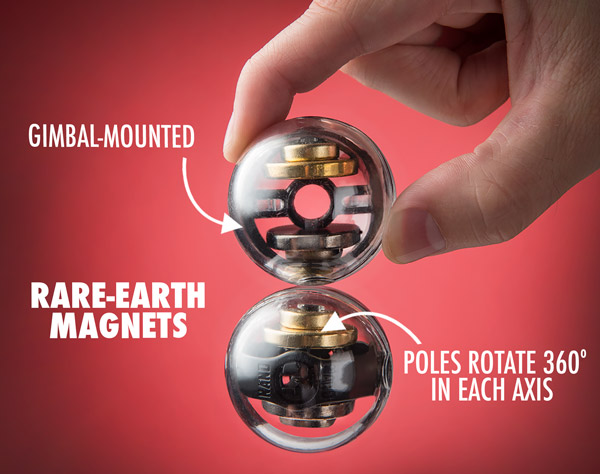 Just Roll with It

It’s fascinating how your grip on a Spinning Magnetic Orb doesn’t get in the way of its response to magnetic fields. But things get really interesting when you set the included pair free and let them interact with one another.

As they spin together locked in a magnetic embrace, their relative position and orientation remains unchanged even as the seam on the shell turns one way and the ring inside spins in another.

The Closest Thing to Mind Control

You can make Spinning Magnetic Orbs roll without ever touching them, and even steer them, by guiding them with a magnet suspended from above. You’ll feel like you’ve tapped into psychokinetic powers as you hold one orb in your hand and make another orb slide and spin on a tabletop.

In addition to the pair of gimbal-mounted Spinning Magnetic Spheres, each set also comes with a pair of proxy spheres. 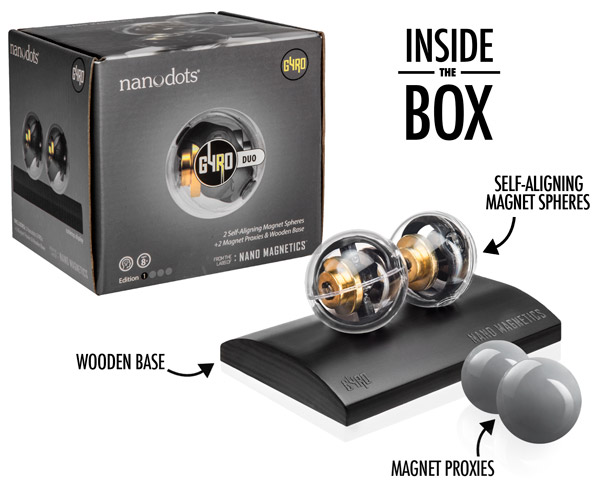 One set includes a pair of Spinning Magnetic Orbs, a pair of proxy orbs, and a wooden display stand.

Question: Would you make a video answering some of your customers' inquiries?

Question: Do they levitate?

Answer: We’ve got a few different gifts for you to check out if you’re interested in magnetic levitation, but Spinning Magnetic Orbs are not made with levitation in mind. They sure are fun to spin, though!

Question: What’s inside the gray balls?

Answer: The gray proxy balls contain spherical magnets that give you more attractive stuff to play with. Containing a free-rolling magnet inside the hollow shell, they’re less sophisticated than Spinning Magnetic Orbs, but they give you a chance to experiment with the Orbs.

Magnetic marbles for building and playing.