Writing utensils that leave an impression. Like the free pens cluttering your junk drawer, Borrow My Pen? pens advertise a local business. But unlike ordinary free pens, each Borrow My Pen? promotes a hilariously offensive establishment, from the “Last Hurrah Elderly Arcade” to “Undies-to-Go”. Each ballpoint from the set of eight features a uniquely subversive slogan.

The next time someone wants you to lend them a pen, slip them a Borrow My Pen? and revel in their reaction. And should you loan one out to a friend who thinks a novelty pen promoting “Stuffed with Love Taxidermy” is in bad taste, you should remind them that pens are for writing, not chewing on.

Teach those pen-pinchers a lesson!

There he is, walking up to your desk. Yep, he wants to “borrow” your pen. Good thing you’ve got your Borrow My Pen? pen handy. It’s a ballpoint made for embarrassing pen stealers. Oh, he took the bait. “Hey man, what’s with that pen you’re writing with?” Got him.

The pen is mightier than the sword, especially in a prank war. Hand out one of these bad boys and your enemies will think twice before taking a pen from you. 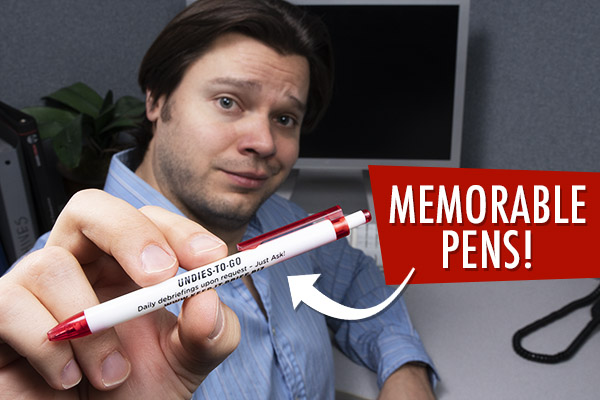 Go ahead buddy, borrow my pen.

Each pen more embarrassing than the last

Make sure to pick the right weapon for the job. Have a friend who is a little sensitive about their body hair? Lay the “Electrolysis Is Us” pen on them and watch them squirm. Or if you feel that your coworker’s attire is inappropriate for the workplace, lend them the “Undies-to-Go” pen.

Each of the eight pens in the set comes with a unique promotion of a hilarious establishment in one of four accent colors.

What is it going to be today?
“Stuffed with Love Taxidermy” should do the trick!

Answer: No, it’s a set of eight dumb joke pens. If you’re looking for something a little more dignified, check out the Fisher Space Pen. But if not, check out our Liquid Ass fart spray.

Question: How many colors does it come in?

Answer: Borrow My Pen? is a set of eight pens. While every one of the pens carries a different slogan, there are two of each color in the set.

Question: What does “proctology” mean?