Erasable Memo Pad: Jot down and erase notes with the included pen

Write down and erase notes with the included silicone pen. Many of the notes we write don't have a long shelf life. We jot down phone numbers, customer support "reference numbers", website addresses, and product SKUs, but we only need them for a short time.

With the Erasable Memo Pad, you can write down reminders, erase them using the included pen, and reuse the pad. There's no little pieces of paper cluttering your desk and no unnecessary waste.

The pad and pen are made from soft, flexible silicone which allows the ink to be easily erased. In fact, any standard ballpoint pen and pencil eraser will work with the Erasable Memo Pad.

The convenience and small desktop footprint of the Erasable Memo Pad make it a great addition to any office. 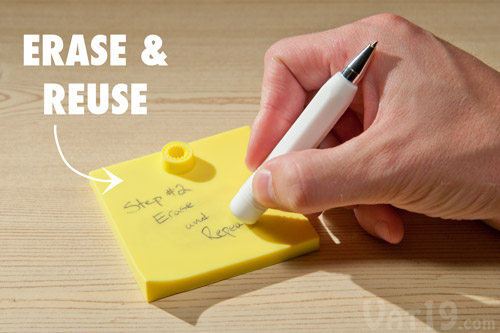 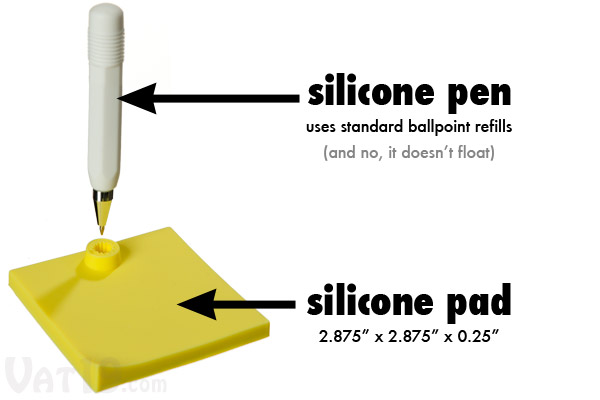 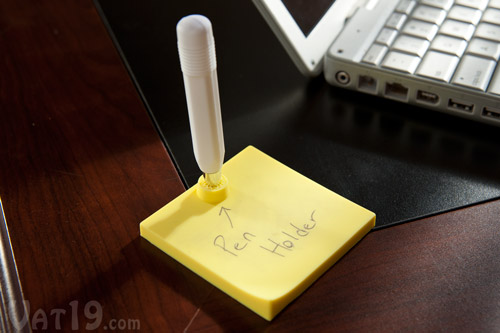 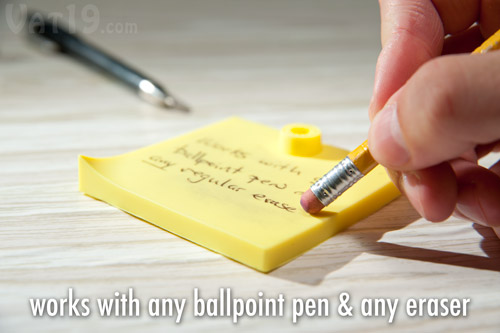 With the Erasable Memo Pad, you can jot down anything -- a website, note-to-self, or ticket # for your billing issue -- and erase it later with the soft, flexible part of the included pen.

Designed as a space-saving and paper-saving alternative to notepads, the Erasable Memo Pad is perfect for all of those tidbits of information that are discarded mere hours or days after being written down -- like the phone number for the "escalated support team" to which you're about to be transferred to (again). Write down reminders, phone numbers, notes-to-self and erase them later.

The pen is also the eraser

The Erasable Memo Pad comes with a small ballpoint pen whose barrel is made from soft, flexible silicone. This acts as an eraser and it works. Seriously. Use the included pen to remove messages from the Erasable Memo Pad.

Perfect for taking down a quick note

The Erasable Memo Pad is roughly the same size as a normal sticky note. It takes up a small footprint on your desk, looks cool, and doesn't waste paper. The Erasable Memo Pad comes with a silicone memo pad and silicone pen.

The pen is always where you need it!

The Erasable Memo Pad conveniently includes a pen rest so that you don't have to scramble to find a pen when you finally get the number of the manager who can actually process the refund on your outrageous cable bill (seriously, who would purchase Glitter twenty-seven times in one month via OnDemand?!). The included pen holder ensures you've always got a pen handy when you need to jot down a quick note.

The Erasable Memo Pad is designed to work with any ballpoint pen and any regular eraser. You do not have to use the pen that comes with the pad.

Note: Should you need to replace the ink in the included pen, it's no big deal. Simply take any standard ballpoint pen refill and cut it down to size. The Erasable Memo Pad works with any ballpoint pen and standard pencil eraser.

Question: Do I have to use the pen that comes with it?

Answer: No, the Erasable Memo Pad works with any standard ballpoint pen.

Question: Does it really erase?

Answer: Yes. You can use the soft, flexible part of the included pen or a standard pencil eraser to remove markings.

Question: Will the pen get shorter over time as you use it to erase?

Question: Will I see markings from previous notes underneath new writing?

Answer: Yes, vaguely. After repeated uses, the pad will look a bit "used" and similar to a piece of paper that has been written on and erased several times. However, you will not have any trouble reading new notes. The manufacturer states that you can fully clean the pad by placing a piece of tissue paper soaked in household bleach on top of the pad for 30 minutes. This isn't necessary, but it may appeal to the clean freaks amongst us.

The pen with an endless supply of metal "ink".