$69.99
Buy Now at Amazon
Why can't I buy this at Vat19?
*Note: The product details shown on Vat19 may vary from what is available at the store(s) above.

Don the Inflatable Dinosaur Costume and pose like the prehistoric predator you are.

This Jurassic jumpsuit totally covers your body in T. rex style while the air-filled design keeps you mobile (except for the intentionally stubby arms).

The inflating fan replaces traditional costume stuffing and padding with a cushion of air, so you'll feel as cool as you look. Practice prehistoric parkour or just run around and terrorize the neighborhood dressed like a dinosaur! 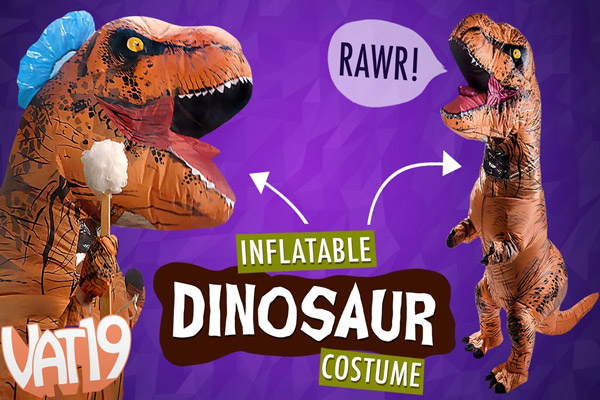 Suit up and get scary-silly in this Inflatable Dinosaur Costume. Modeled after the king of prehistoric beasts, the air-filled garment turns you into every child's dream: a walking, talking T. rex.

Since the suit isn't stuffed or padded with anything but air, you've got the mobility to perform prehistoric parkour and dance like a dinosaur.

With attention to detail in both the shape of the suit and the pattern printed on it, the realistic flourishes sell the impossibility that dinosaurs walk among us.

You can surprise, startle, and scare friends and strangers alike. But when was the last time you saw a tyrannosaurus boogie to the Cupid Shuffle, do a backflip, or just reach for something on a high shelf? The contrast between frightful lizard and limber movement creates a sense of prehistoric playfulness that easily amuses everyone.

Just look at the stubby arms!

It's been said that everyone needs a tuxedo, but in today's world, you'll probably get more use out of a dino suit than a dinner jacket.

Standing seven feet tall, the full-body jumpsuit makes quite the impression at any party. A battery-powered fan blows air into the suit, inflating it to its full height and expanding its three-foot-long tail, while you look through the viewing port in the dino's neck. A pair of included wearable claws completes the ensemble. 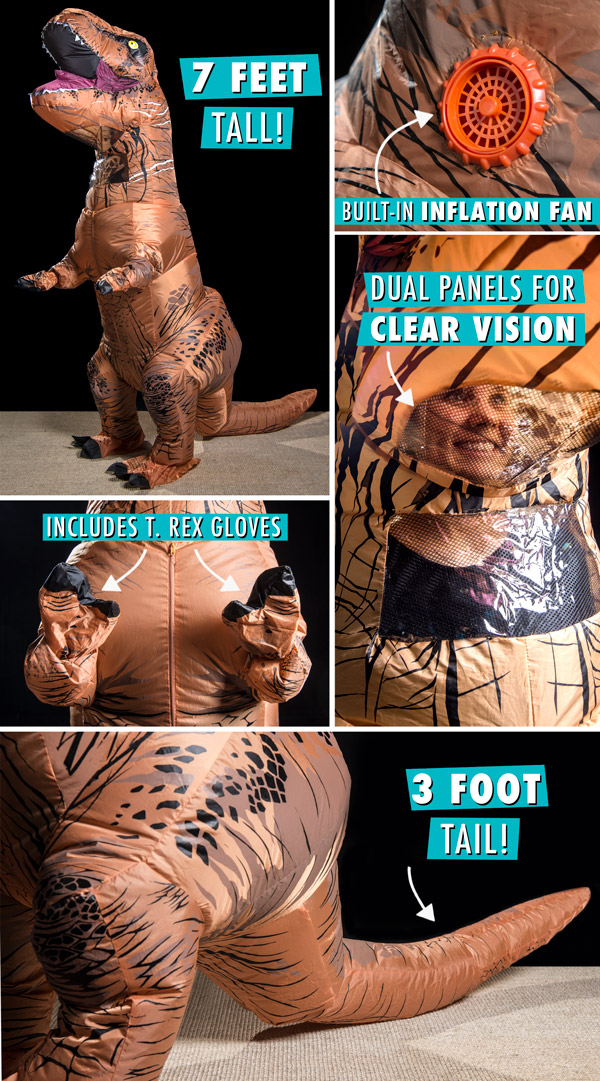 When dinosaurs ruled the earth...

...everyone had an awesome time!

The suit's spats-like foot covers leave your natural sole able to touch the ground, and the cushion of air between you and the suit maximizes your mobility. Therefore, the biggest limit to how well you can get down is your own dancing skills.

Whether you're as talented as Fred Astaire or as clumsy as Fred Flintstone, you're sure to make a scene in an Inflatable Dinosaur Costume.

Get on the floor; everybody walk the dinosaur!

When you climb inside your Inflatable Dinosaur Costume, you're not just strapping on a cardboard cutout or wearing a dino-themed hat. The whole ensemble enrobes you in a multi-faceted 3D suit that's a sight to behold. 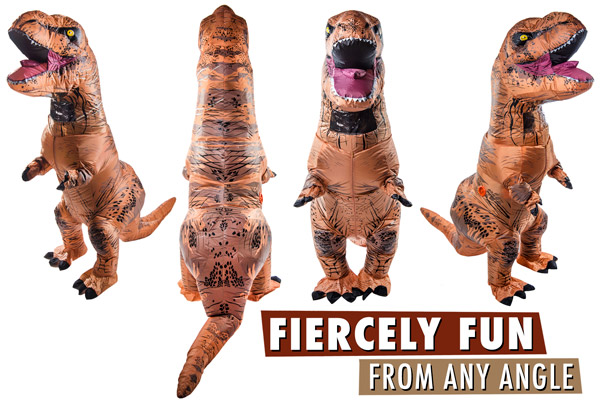 Question: What size does it come in?

Answer: Currently, we're offering the Inflatable Dinosaur Costume in an adult medium. This size is appropriate for most small-to-average stature adults and even older children/teens.

Question: Will it pop?

Answer: The Inflatable Dinosaur Costume isn't 100% sealed, so pressure can never build up enough to rupture the seams or surfaces. The suit is continually filled with air using a small battery-powered fan.

$69.99
Buy Now at Amazon
Why can't I buy this at Vat19?
*Note: The product details shown on Vat19 may vary from what is available at the store(s) above.

Coat and pants made from real bubble wrap.

Creepy animal masks that move when you talk!