Pump some brain iron with the beam-bending logic game, Laser Maze. Your goal is to arrange a series of tokens to reflect and split a laser beam and hit all of the targets.

Laser Maze includes 60 unique challenges ranging from beginner to expert difficulty. If you get stumped, don't worry, solutions are printed on the reverse of each card.

Get ready for a laser-bouncing logic game!

Laser Maze challenges you to skillfully direct a laser beam around a small 5x5 board in order to light up one or more targets.

This one-player game is fun for two reasons. First, it uses a laser. Second, it requires you to engage your brain. Remember, that's the organ located a few feet above your phone. It will certainly thank you (and Laser Maze) for the exercise. 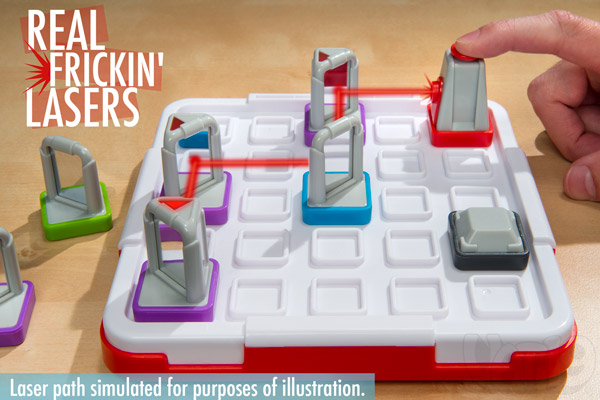 Win the game by manipulating the laser to hit the targets.

Lasers always shoot straight... unless aimed into a mirror.

Laser Maze includes a variety of pieces that bounce the beam, split the beam, block the beam, or simply allow it to continue along its path. Your goal is to use these pieces to guide the beam around the board until it hits one or more targets. Oftentimes, this is easier said than done. 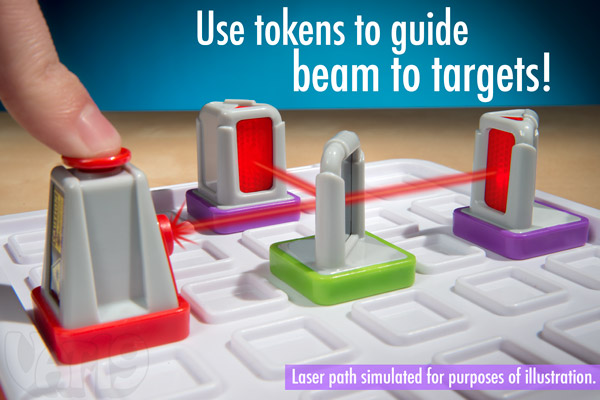 Guide the laser beam around the board using Laser Maze's beam-splitting and beam-bouncing tokens.

Meet your nemesis: The challenge cards

To play Laser Maze, you must first select a challenge card. This double-sided card features a scenario to solve on one side and the solution on the reverse. 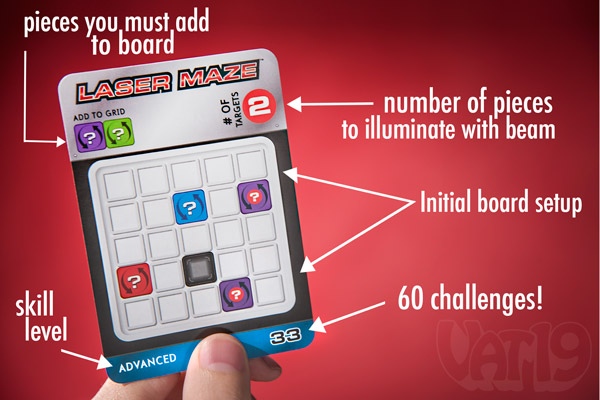 Double-sided challenge cards feature a puzzle on one side and the solution on the reverse.

Laser Maze includes six different tokens. There is one laser whose beam can be split to hit as many as three targets in a single game.

The final two tokens are the checkpoint and cell block. The checkpoint requires the beam to pass through it, but the beam is unmodified. The cell block prevents other tokens from occupying its space, but does not block the laser beam's path.

In addition to the laser beam, Laser Maze includes five types of tokens.

Laser Maze includes 60 challenge cards ranging from beginner to expert. There are fifteen challenges each for beginner, intermediate, advanced, and expert difficulty levels. The solution to each puzzle is included on the back of each card. 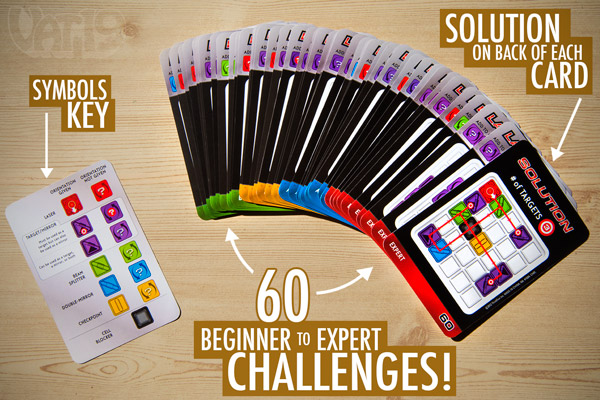 Become a Laser Maze master by solving all 60 challenges.

Try the intermediate challenge below.

The card (left side of image below) outlines the location, but not the orientation, of six tokens (one yellow checkpoint and five purple target/mirrors). The card also gives you the location and orientation of the green beam splitter. You must also add the laser to the grid, but the card does not give you the location or orientation. Finally, you must light up two of the five targets.

Think it through and then click the image below to see the solution. 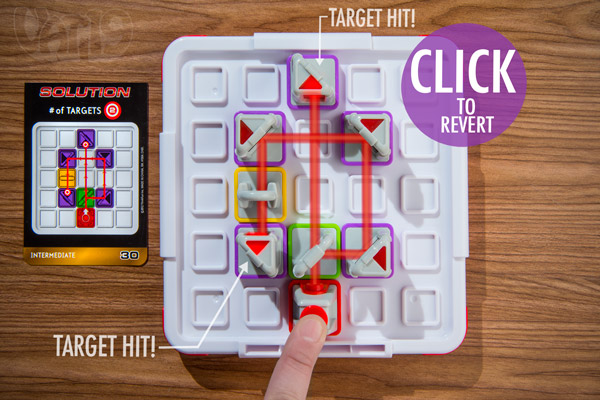 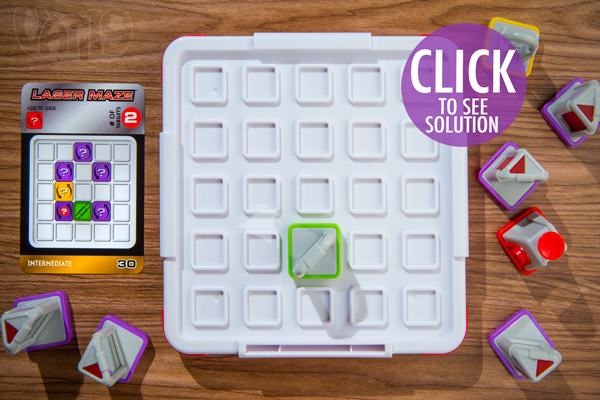 Try solving the Laser Maze challenge pictured above. You must determine where to place the laser so that
two mirror/targets are illuminated.

Question: Isn't this just like that awesome game, Khet, that is also available at Vat19.com?

Answer: It is certainly similar in that it uses lasers and laser-modifying tokens. However, Khet is more like chess in that you compete against another player. Laser Maze is more like solitaire chess (imagine that, another Vat19 cross-promo!) in that it's a one player game involving individual puzzles.

Question: Can you see the path of the laser?

Answer: No, all you can see is if the laser hits your intended target(s). The mirror/target pieces feature semi-opaque areas that will glow red if the laser strikes it.

Question: If I look into the laser, will it hurt my eyes?

Answer: No. The laser used in Laser Maze is eye safe. However, try to avoid aiming the laser into your eyes.

Question: Will this game make me smarter?

Answer: If we say yes, will you buy one?

Answer: Perfect! We thought about including a primer on quantum mechanics with your purchase, but it'd be a waste of money. After completing Laser Maze, you won't need that book; you'll write that book. Now, buy, buy, buy!

A logic puzzle where you shape new worlds!