$42.99
Buy Now at Amazon
Why can't I buy this at Vat19?
*Note: The product details shown on Vat19 may vary from what is available at the store(s) above.

If you've ever wanted to live in Super Mario Land, now is your chance! The Question Block Light is styled after the mysterious power-ups from Nintendo's Super Mario Bros and fully rendered in 3D.

With a raised base, the pixelated lamp appears to float a few inches from the table surface, and to keep concussions to a minimum, you turn it on with a downward press instead of smashing it with your skull. Each time you toggle your cube, it emits the iconic coin collection sound.

Maybe now you can finally answer the eternal question, were they really brothers if one of them was named Mario?

Press down on the top, and the lamp will make the sound of a collected coin as it emits a soft warm glow. This piece of decor adds warmth and retro ambience to even the spookiest dungeon.

To turn the Question Block Light on or off, gently press the top of the brick. The entire case sinks down on the pedestal before popping back up. Each time you push the block down, the lamp switches powered state, accompanied by the sound of Mario collecting a coin. A separate toggle switch on the side can optionally mute the sound effect. 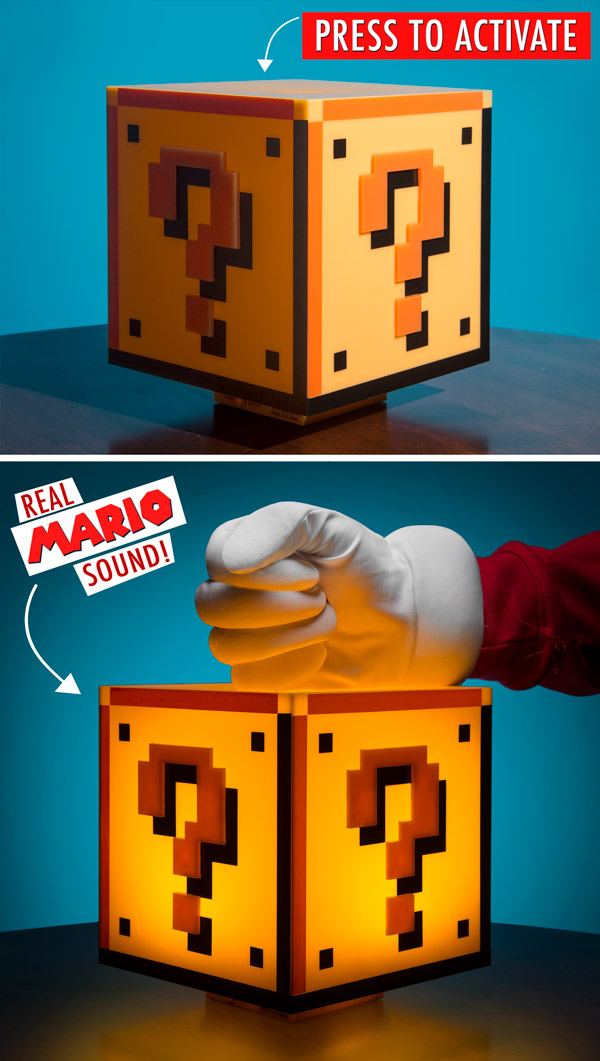 Unlike those old NES cartridges, you won't have to blow on the Question Block Light to get it to work. Plug it in using the bundled micro USB cable (wall outlet plug not included) or go wireless and use 3 AA batteries to put your block wherever you want in your World (except for the underwater world—it’s not waterproof). 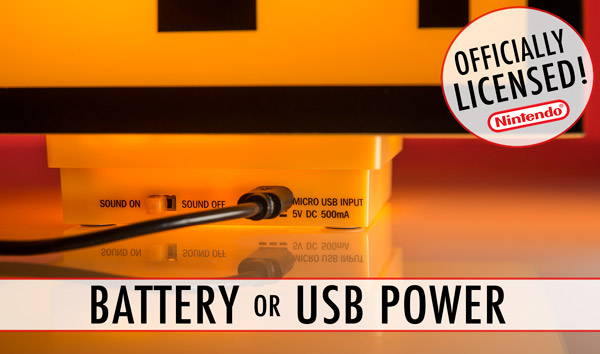 Plug the light in for extra life.

Question: Does it release coins?

Answer: Nope, and you don't need to give yourself a concussion to turn it on, either!

Question: Can you play just the sound?

Answer: The sound only plays when you turn the light on or off. However, you can optionally mute the sound using the discrete toggle switch on the side of the base.

$42.99
Buy Now at Amazon
Why can't I buy this at Vat19?
*Note: The product details shown on Vat19 may vary from what is available at the store(s) above.

Create your own Star Wars Droid™ with LittleBits technology.