Tummple! is a turn-based block-building game where you try to build a rickety tower for your opponent to topple.

Each block must be placed on the base blocks or on top of other blocks. As the structure grows up and out, it loses stability. If you make it fall, you have to keep the rubble as a mark of shame, which is counted against you when the game is over.

Roll a dice to determine whether to place a wooden block or block your opponent with a tump and stack your way to victory in Tummple! 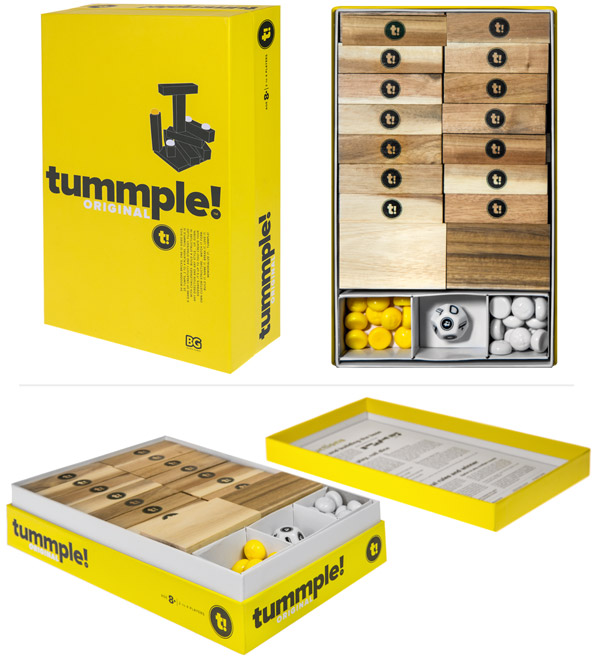 In Tummple, players take turns adding one block at a time to the shared structure without toppling it. Every block has to rest on either the base below or an already-stacked block.

At the beginning of your turn, you roll a dice to determine what face of the block you’ll be stacking. You have to use that side of the block, but you can place it anywhere (and you don’t have to set it at a right angle). This can lead to some pretty crazy buildings! If you topple the tower, the blocks that fall count against you at the end of the game.

The difficulty of determining a safe place for your block (and the skill required to lay it) is perfectly balanced to the pleasure you’ll find in precariously placing a brick where your opponent loses solid ground. 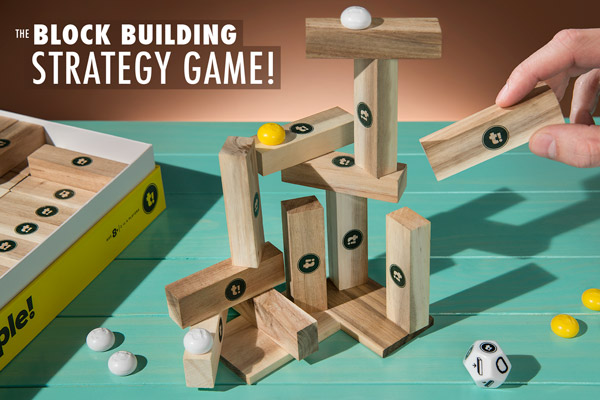 Block your opponents from building

You’ve got more than just gravity working against your climb to victory. Each player also has a chance of placing an obstacle called a tump on the structure. Tumps can be placed on any side of any wood brick and can never be moved once they’re placed.

The die you roll to begin your turn gives you a three in twelve chance of placing a tump. White tumps block everyone from playing on that spot while yellow tumps render the entire block unplayable for the rest of the game. 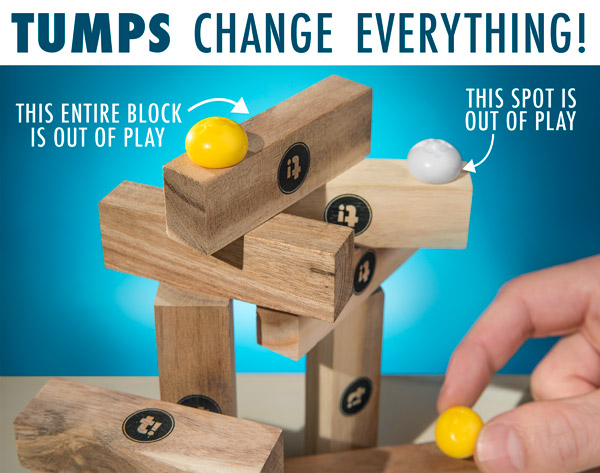 Careful; the tumps you place might come back to haunt you.

Build a night of fun with the family

Tummple is a family game for two to four players. Since each game normally lasts under half an hour, you can play several casual games or start a tournament to find out who the ultimate stacker is. 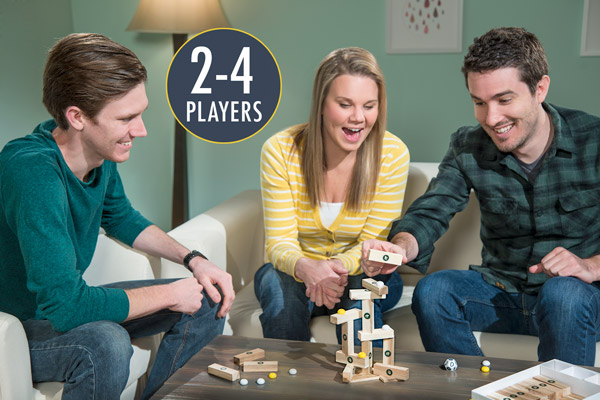 Answer: Nope. While some of the Tummple pieces look similar to Jenga pieces, they’re different games. We still like Jenga, but Tummple’s free-form building mechanic and ability to block your opponent's’ moves with tumps make it a more complex and interesting party game.

Question: But I could still make my own Tummple set with Jenga pieces?

Answer: We suppose you could make your own Tummple set. All you would need to do is cut, sand, and finish two pieces of the wood for the base; commandeer the right number of Jenga blocks; go down to the hobby store and pick up some glass hemisphere beads to use as tumps; and head over to the local Dungeons & Dragons outfitter to pick up a D12, grind off the numbers without throwing off the die’s balance, and paint on the correct symbols. If that sounds easier than scrolling up, clicking a button, and getting a giftable, high-quality Tummple set in an attractive satin-finish box delivered to your doorstep, then have at it.

Question: Would this game be good for a five year old?

Answer: The game designer’s recommended minimum age is 8. The game is fun for all ages, but younger children might not be able to strategize as well or carefully stack the blocks.