$9.19
Buy Now at Amazon
Why can't I buy this at Vat19?
*Note: The product details shown on Vat19 may vary from what is available at the store(s) above.

The USB Lightbulb is a no-fuss portable laptop lamp. To turn it on, simply plug it into any USB port.

Smartly, the USB Lightbulb's power cord also doubles as its flexible stand. The thin electrical conduit easily supports the weight of the bulb so you can position it precisely where you want it.

Housed inside the plastic bulb is a long-lasting cool white LED. And as a bonus, the bulb's surface glows in the dark when not plugged in.

The USB Lightbulb Lamp is as simple to operate as possible: plug it in. There are no switches, no batteries, no lampshade, and no bluetooth pairing.

Simply insert the USB plug into any USB port and you've got light! 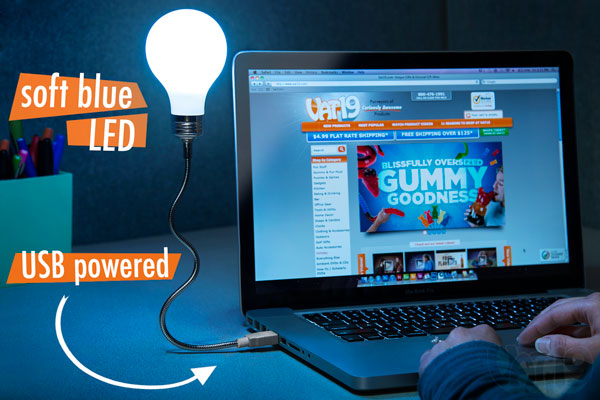 The USB-powered Lightbulb Lamp produces a soft and comforting blue glow
whilst you browse the world's greatest website.

The power cable = the stand

By utilizing a flexible electrical conduit for the USB cord, the creators of the USB Lightbulb Lamp solved two problems simultaneously.

First (and most importantly), they routed power to the LED bulb. Second, they created a stand that is extremely flexible. You can position the lightbulb precisely because the cable holds its shape and is strong enough to support the weight of the bulb. Wicked smaht. 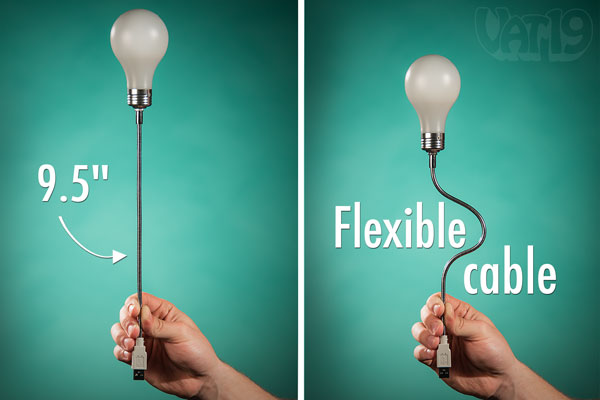 The bulb sits atop a strong articulating arm.

Glows in the dark when not in use!

We love stuff that glows in the dark! And while you wouldn't normally think to make a bulb out of phosphorescent material, we think it's brilliant! (Pun city!) Whenever the USB Lightbulb Lamp is plugged in, it's charging the glow in the dark material. 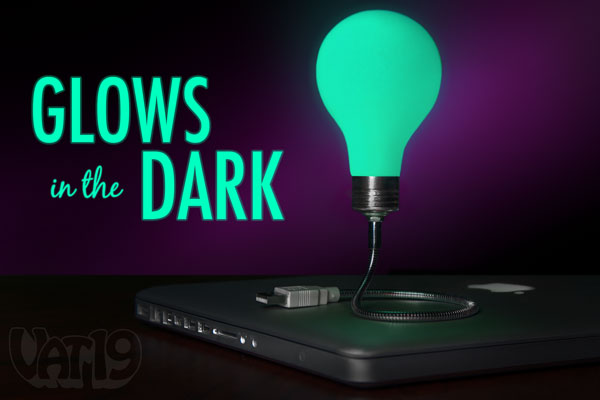 The USB Lightbulb Lamp glows in the dark when not in use.

Question: Does it need a battery?

Question: Is there an on/off switch? How do I turn it off?

Question: What color is the light?

Answer: It's a cool white (meaning it has a hint of blue in it).

Question: How bright is it?

Answer: It's a soft light. It certainly won't illuminate an entire room. However, if you're using your computer in a dark room, it's going to provide plenty of illumination for the keyboard and surrounding area.

$9.19
Buy Now at Amazon
Why can't I buy this at Vat19?
*Note: The product details shown on Vat19 may vary from what is available at the store(s) above.

Your own images in a classic viewing toy.

A simple, silicone beer holder for your shower.