Miniature and fully functional version of the classic brain teaser. The biggest-name puzzle cube on the planet is now smaller than ever!

The World’s Smallest Rubik’s Cube is a fully functional 3x3 cube that solves with the same algorithm as the regular-sized version. Carry all 43 quintillion permutations in your pocket, working through them on bus rides and other periods of downtime throughout your day.

Even if you never plan on attempting the challenge, you can spin it in your hand to feel like a giant or use the cute conundrum as retro decoration.

A new scale of fun

At Vat19 we celebrate the Rubik’s Cube in all its forms, and now we have the smallest form yet!

This puny puzzle is small enough to fit in that weird tiny pocket of your jeans but still functions the same as a full-sized 3x3 cube. Work on your mental and physical dexterity as you manipulate the rows to solve the classic conundrum. Be warned, though: just because it’s smaller doesn’t make it any easier to solve.

It’s almost small enough to wrap your brain around.

Who knew that mental challenges could be so adorable? Measuring less than an inch per side, the World’s Smallest Rubik’s Cube is a baby version of the popular brain buster. It’s a fun way to puzzle on the go and a tiny token of 80’s nostalgia. 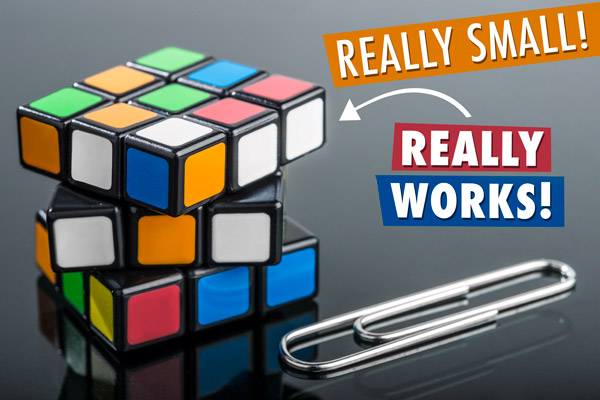 Honey, I shrunk the cube!

Question: Does it have the same number of tiles as a full-sized Rubik’s Cube?

Question: Can I use this for speedcubing?

Answer: The World’s Smallest Rubik’s Cube probably isn’t the best bet for a competition, unless there’s a cuteness portion of this competition.

A classic combination puzzle with a clear case.

A working mini model of the classic drawing toy.