All Queens Chess: Two-player strategy game using a board full of chess queens.

Two-player strategy game using a board full of chess queens. $8.99
Buy Now at Amazon
Why can't I buy this at Vat19?
*Note: The product details shown on Vat19 may vary from what is available at the store(s) above.

Make way for the Queen! All Queens Chess pits a whole team of the most powerful chess piece against a roster of equally matched opponents.

Each piece on the 5x5 board of All Queens Chess moves just like a queen in chess. However, instead of capturing enemy pieces and occupying their squares, their queen blocks yours, and you have to stop short. The ultimate goal is to get four queens in a row horizontally, vertically, or diagonally.

Find out who really rules the board with All Queens Chess.

All Queens Chess combines the royal pedigree of traditional chess with strategic elements of Connect Four to create an entirely new game.

To win the game and claim the throne, you must get four of your six queens in a straight line in any direction—easier said than done. As in chess, queens can move any number of spaces in a straight line but unlike chess, must stop if an opponent is blocking the way. 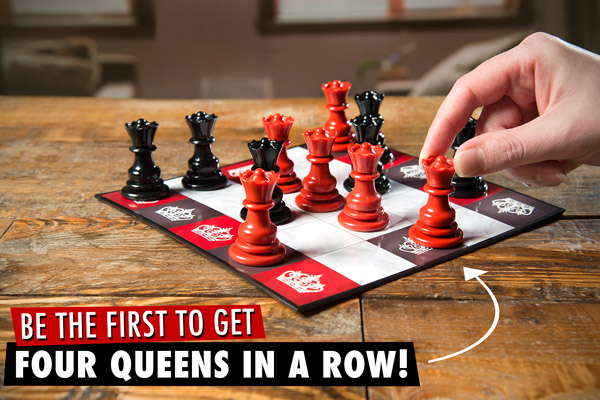 We are the champions

All Queens Chess is a game of seeing and seizing opportunities. Plan several moves ahead, prepare for any scenario, but be ready to change your strategy at the drop of a hat. Slip a row of four monarchs together horizontally, vertically, or diagonally to win the crown.

Queen to her color

All Queens Chess is played on a unique 5x5 grid with six identical queens per side. The red queens begin on black squares while black queens begin on red squares. Once your team of co-regents has left their starting positions, the colored spaces behave just as any other place on the board. 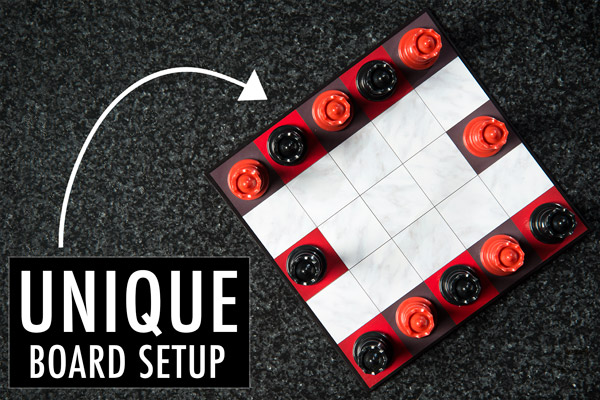 In chess, the queen is no mere figurehead; she’s the most powerful piece on the board. In All Queens Chess, the same holds true—except every piece is a queen.

Each of your six queens can move any number of spaces in a straight line, as long as there isn’t another piece in the way. It would be undignified to jump over another queen or push her off of a space, and regicide is out of the question, so you can’t kill enemy queens either. You’ll have to use strategy and patience to outmaneuver your opponent. 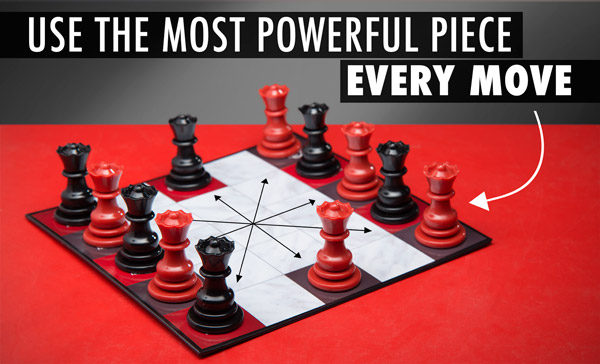 Move with the grace of a queen. 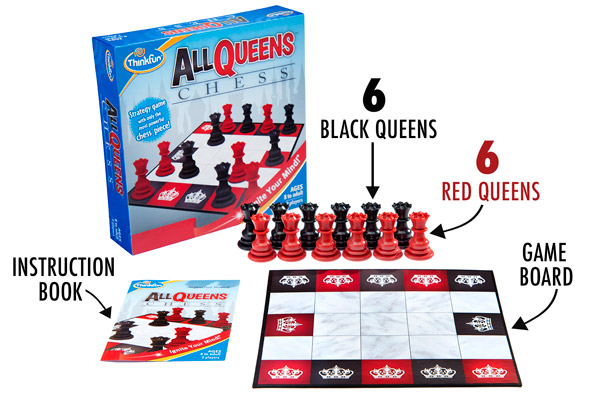 Question: Can’t I just play this game with a normal chessboard?

Answer: Probably not. All Queens Chess is played on a smaller board with unique spaces and six times as many queens.

Question: How is this different from normal chess?

Answer: It’s easier to describe how it’s the same. The queens can move like a queen does on a traditional chessboard. Otherwise, the rules, strategy, and end move are different.

$8.99
Buy Now at Amazon
Why can't I buy this at Vat19?
*Note: The product details shown on Vat19 may vary from what is available at the store(s) above.

Make your own 3D dog skeleton.

A skill game that flips your vision upside-down.