An ingenious circular board featuring a center "zero space" allows three players to duel it out without sacrificing any of the rules of traditional chess.

Lateral moves sweep around the arc of the board, enabling sneak attacks. A diagonal piece can pass through the center and with a clear path can even return to its starting position. And a single move can result in the checkmate of both your opponents!

Three Man Chess includes a fold-up board and three sets of pieces.

Expand your circle of friends with Three Man Chess!

Chess is one of the world's most popular games, but not much about it has changed in the last millennium — until now!

Three Man Chess adds a third player (along with a healthy dose of new and complex strategies) while carefully preserving the rules of traditional chess. Bravo Three Man Chess creator! 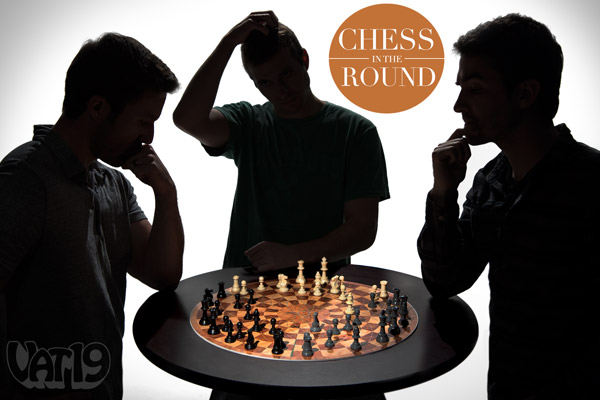 The addition of a third person adds an exciting new layer of intrigue to traditional chess.

In Three Man Chess, all traditional piece movements have been retained.

However, the circular board makes it possible for a laterally-moving piece (such as a Rook) to arc around the board. And diagonal moves can loop into the center "zero space" from one direction and exit it traveling the opposite way!

Simply put, there's some wild stuff going on in Three Man Chess. To assist with diagonal movements (especially through the center "zero space"), simply follow one of the colored trajectory lines passing through the piece's starting position.

Although the pieces follow the same movement rules in 3-Man Chess,
the circular board introduces new and interesting strategies.

You don't have to learn new rules!

Three Man Chess was designed to preserve the rules of the game you love. If you can play regular chess, you can play Three Man Chess. All you need is two friends. If that's a stumbling block, we've got a website full of bribe-worthy awesomeness that could help with that!

The only functional difference between traditional chess and Three Man Chess is the inability to laterally attack your neighboring opponent from the back two rows on the board.

Despite the similarities in rules, the third player creates an exciting new twist on traditional chess. For instance, you could put both your opponents in check on one move! And with each move, you need to simultaneously defend against and plan attacks upon two opponents who surround you. It's all about the strategy, son! 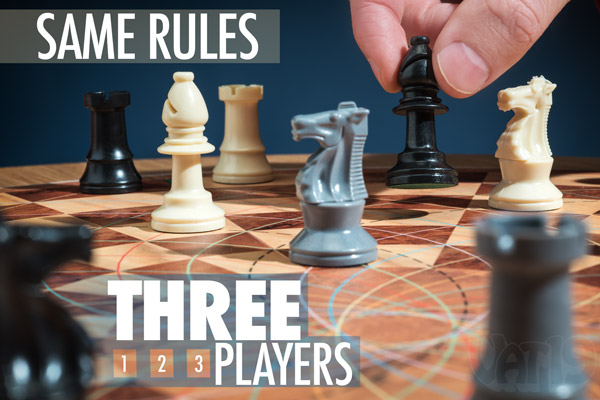 Folds away for convenient storage 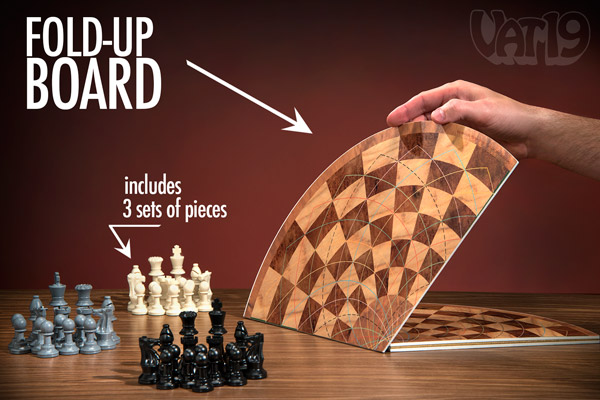 Three Man Chess includes three sets of pieces and a large fold-up board.

Answer: We believe the manufacturer intended "man" in a gender-neutral sense. Chess, and obviously Three Man Chess, is a gender neutral game.

Question: Is it difficult to learn how to play?

Question: What if I don't have two friends?

Answer: Smart people play chess. And being smart is the coolest thing in the world. Buy Three Man Chess and exercise your brain. It'll be fun and it's darned good for you.

Master the perfect cast with this desktop fishing game.

Invasion of the Cow Snatchers

Logic puzzle where you lift livestock using a magnetic UFO.