Marshmallow Bow and Mallow: Bow and Arrow toy fires marshmallows up to 30 feet.
Want to meet the Vat19 Crew? Book a tour today! Get your hands on a Bow and Mallow and turn marshmallows into mushy missiles!

The easy-to-use bow shoots miniature marshmallows distances of over 30 feet! Fill the attached magazine tube with mini marshmallows, pull back on the plunger, and start firing away. The magazine can hold up to 25 mini mallows, so you don’t have to reload mid-battle.

The pillowy projectiles make a fun, safe shootout for all ages. The quickly-assembled bow is dishwasher safe, so you can stay clean between battles.

The only hard part of using the Marshmallow Bow and Mallow is not eating your ammo!

Get started by removing the magazine tube and filling it with your delicious ammo. Insert the marshmallow magazine back into the barrel and it will create a vacuum. To fire, pull back on the plunger and release; the bow uses air pressure generated from the plunger to shoot the marshmallows.

The magazine automatically drops another mini marshmallow into the barrel after every shot, so you can use rapid fire to overwhelm your foe.

While easy to use, the Marshmallow Bow and Mallow still has impressive range. We were able to shoot our puffy projectiles up to 33 feet in our very unscientific testing.

As with a regular bow, you get more distance the farther you pull back the string. Use the included targets to perfect your shot so that you’re ready to snipe your opponent in the next marshmallow melee. The little Robin Hood or Katniss in your house is sure to have hours of fun with the Bow and Mallow.

Unlike a real bow and arrow, the Marshmallow Bow and Mallow doesn’t need to be reloaded after every shot. The magazine tube holds an arsenal of up to 25 mini marshmallows. The last thing you want is to run out of mallow missiles in the middle of an all-out candy war.

If you find some sticky residue in your magazine, simply remove the tube and place it in the top rack of your dishwasher. 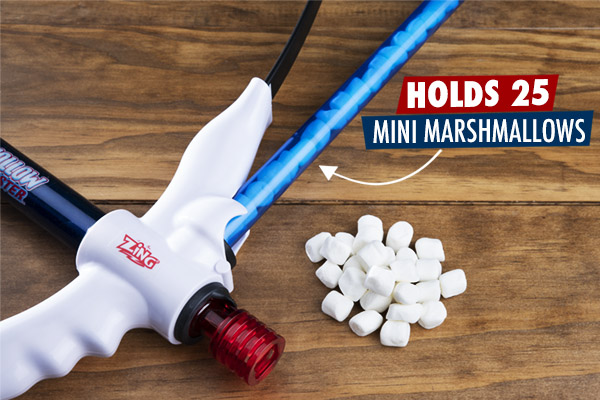 Our marshmallows will blot out the sun!

Question: Won’t this get really sticky?

Answer: The magazine on the Marshmallow Bow and Mallow is dishwasher safe, so you can keep residue to a minimum. You can also dust some cornstarch on your mallows to keep them from sticking.

Question: Is this safe to shoot at people?

Answer: We don’t recommend shooting at someone’s eye but, otherwise, you should be fine. The marshmallows don’t get nearly enough velocity to be harmful.

Shoot mini-marshmallows up to 30 feet.