$9.99
Sold Out (more Mar. 4)
FREE SHIPPING
Email Me When Back In Stock
— or —
Buy Now at Amazon
Note: The product details shown on Vat19 (including price) may vary from what is available at the store(s) above.
+ Add to Wishlist

Give this star-spangled unicorn a belly squeeze, and the rainbow-colored foam ball will go soaring with a satisfying sound. Pop! The ball flies up to 20 feet away!

Then reload the magical beast with one of the included multicolored spherical missiles and pop again and again. Each Popper, recommended for ages four and up, comes with six foam balls for maximum fun.

Unicorn Ball Poppers have been sent to this realm for one purpose: silly satisfaction. Just like their non-magical Popper brethren, each squeeze of the mythical beast’s tummy sends a multi-colored ball flying with a pleasant popping sound. Reload with another rainbow orb and enjoy all over again.

A good squeeze of the Unicorn Ball Popper can fire the rainbow orb up to 20 feet away. That’s far enough to bop a sibling in the head with a precision shot or start an all-out interoffice war.

Since the ball is foam, there’s little chance of harming anyone or damaging anything, but a big chance you’re going to have a lot of fun. 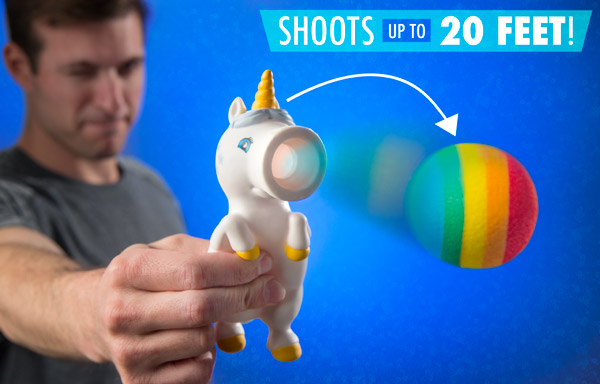 Popping an animal popper is plain fun. Thanks to the six rainbow-colored foam balls, you can reload five more times before you have to apologize for knocking down your friend’s desktop decorations in order to get your balls back. 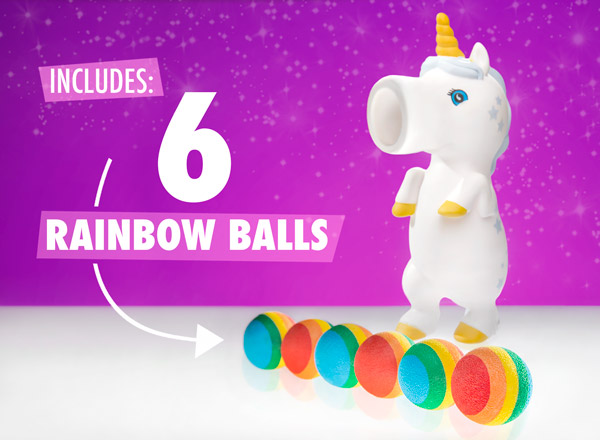 What more could you wish for?

What’s the difference between just a horse and a legendary unicorn? A horn, of course! With a singularly centered spike on its head and a magical ability to delight, the Unicorn Ball Popper fully looks the part it plays. From its silvery star-spangled flanks to its golden hooves, this popper’s appearance is matched only by its fun. 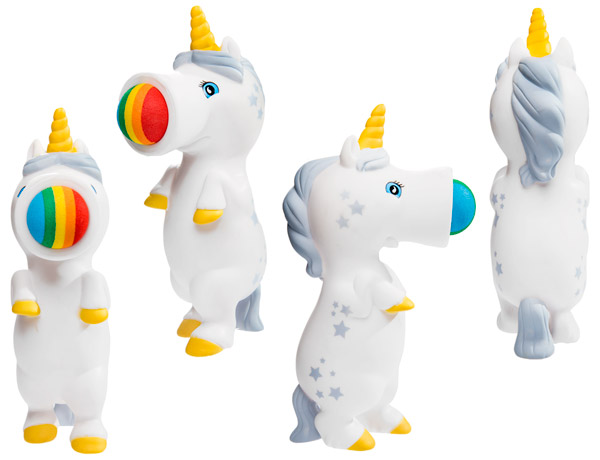 Question: Does it come in other styles?

Answer: The Unicorn Ball Popper is so fabulous that there only needs to be one style, but we also carry other Animal Ball Poppers with the same functionality.

Question: Will it pop out other balls?

Answer: The Unicorn Ball Popper will shoot any ball of the right size and density, which includes the six foam rainbow balls that come with it and any balls you’ve collected from other Animal Ball Poppers. You can also buy additional 12-packs of foam balls on the non-magic Animal Poppers webpage.

Sorry! We're sold out until March 04.

Add a hot liquid to reveal a rainbow mane.

A sugary snack with mythical origins.