Sling Stix is a new way to play the oldest pastime. Playing catch (or any other ball game) has been reinvigorated thanks to a pair of suction cup wands that grab onto the included ball with a super grip.

To throw the ball, sling your arm over your head and push the trigger to release the vacuum hold and send the sphere sailing. Your partner merely has to hold up their wand to grab the ball out of the sky, since the attached suction cup will satisfyingly stick to it when struck.

Without set rules to worry about, there's more time for enjoying the fun of the game and less time looking for loopholes to bicker about—except which color of handle you'll get to use.

Sling Stix is a toy that doesn’t require a rulebook to enjoy. The throwing technique is intuitive enough to be immediately engaging but nuanced enough that you’ll want to practice and master the perfect sling. And no matter how many times you do it, catching the ball on the suction cup is satisfying and feels a bit like magic.

This design makes Sling Stix fun to use in a simple game of catch or in an elaborate game of your own creation.

Play catch with a twist!

Playing with Sling Stix is different from the games of catch you’re used to, but it follows the same basic rules (namely, catch the ball).

Tossing the included ball doesn’t require as much force as throwing a ball with your hand, relying instead on pressing the trigger during the right time in your throwing motion. This releases the ball from its suction cup hold and sends it sailing towards your partner.

When catching, you don’t need to cradle the ball like you would with a baseball mitt. Simply hold your stick upright and watch as the ball sticks with a gratifying “thwap.” 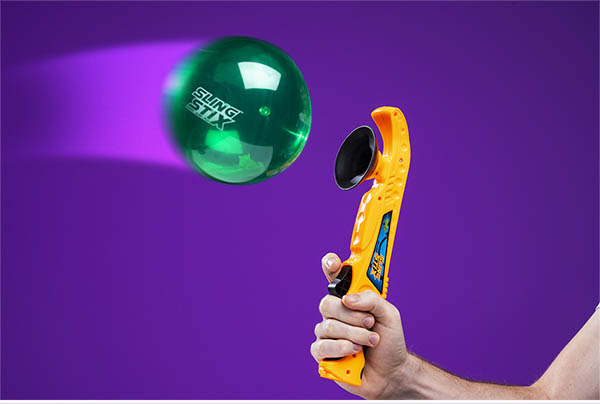 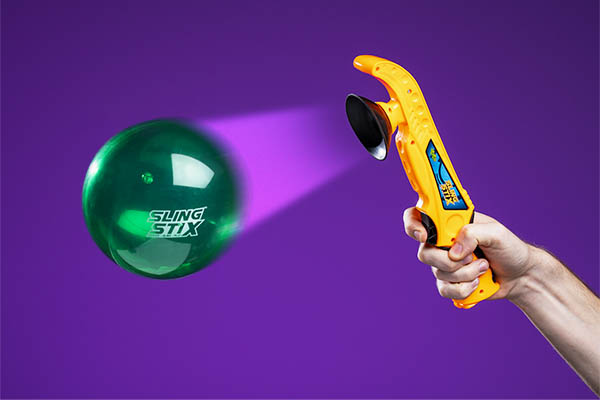 Use the suction cup and trigger to catch and release.

The Sling Stix set includes two suction cup wands and a durable ball for slinging around. In addition to the fun you can have with the wands, the ball’s small size and ample bounciness make it fun to play with on its own. 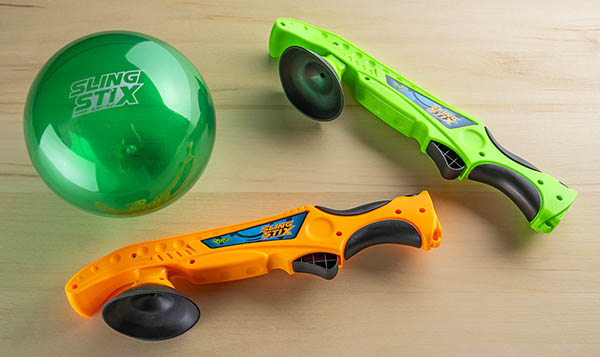 Question: Is this hard to use?

Answer: Sling Stix is designed to be easy to learn. There’s definitely a bit of a trick to getting a good throw, but once you get it down it’s quite fun.

Question: Can you only play with two people?

Answer: Sling Stix doesn’t have a prescribed set of rules so you can play however you like. As proof, check out the video above where we play Sling Stix dodgeball!

The amazing ball that bounces on water.