Most awesome droid in the galaxy. This is the droid you're looking for. For nearly forty years, R2-D2 has captivated the affections of children and adults alike as the most charming droid in the galaxy. That is, until the spherical droid BB-8 rolled onto the scene. Now BB-8, the astromech droid featured in Star Wars Episode VII: The Force Awakens, can belong to you!

Just like in the movie, he’s not CGI. This adorable android is a technological powerhouse made possible only by pushing the engineering envelope. He rolls on his spherical body, while his head remains fixed on top. Painstaking detail has been taken to ensure your officially-licensed BB-8 looks and functions similarly to his silver-screen counterpart.

When you control him via your phone or tablet, he nimbly moves along flat surfaces and around objects. In addition to controlled guidance, BB-8 can recognize and react to your voice, just like the droid from Star Wars. And through the magic of augmented reality, you can even send and view holographic messages.

Of course, BB-8 wouldn’t be a true droid if he didn’t have a mind of his own. BB-8 is programmed with autonomous behavior, making him more than just a remote controlled toy. Like a real astromech droid, he’s a companion. And his adaptive personality programming will enable his actions and attitude to evolve as you interact with him.

Wirelessly Interface with Your Droid

BB-8 is a robotic ball whose power is unlocked by your phone or tablet.

An app on your iOS or Android device becomes your command center, enabling you to take control and drive BB-8 around, give him directives like move in a figure eight or box pattern, record and view AR holographic messages, give him voice commands, and send him to patrol on his own while he sends back data about himself and the terrain around him. 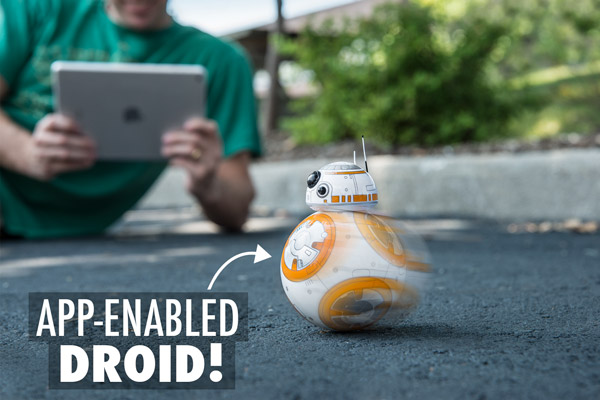 This is the next best thing to having your own T-70 X-Wing.

Whether it was the teaser-trailer for The Force Awakens, the Star Wars Celebration panel, or just now, the first time you set eyes on BB-8, you knew he was a special little guy.

His unique spherical body and swiveling domed head design, combined with his quirky personality, make him an instant fan favorite.

Check out this short clip of BB-8 on patrol!

Admittedly, Earth technology isn’t quite on par with the Galactic Republic’s (let alone the First Order’s), so true projected holograms are still not a reality yet.

But you can create and play back your own augmented-reality messages that, when viewed through the Message section of BB-8’s app on your smart device, have the appearance of projected holograms just like in the Star Wars movies!

After recording a message using the front-facing camera on your phone or tablet, aim your device’s rear-facing camera at BB-8 and play your recorded video back to make it appear as though he is projecting it for you in your own home environment. 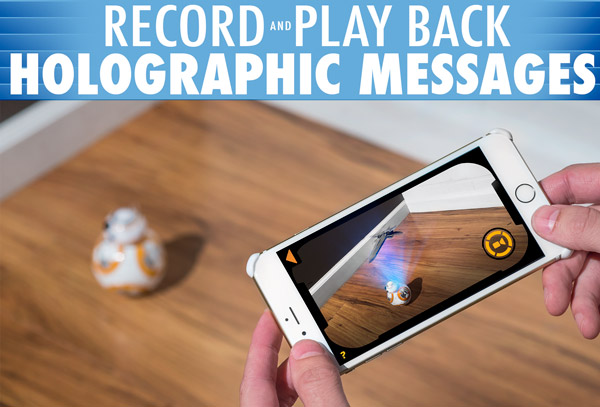 “Help me, mom. You’re my only hope. Will you please make me a snack?”

In the Star Wars Universe, droids are powered by hydro-glycolic fuel cells. This little guy uses a rechargeable lithium ion battery that can enable him to roll around and chirp for up to sixty minutes before he needs a recharge. When his power runs out, set him on the included inductive charging platform to bring him back to life. 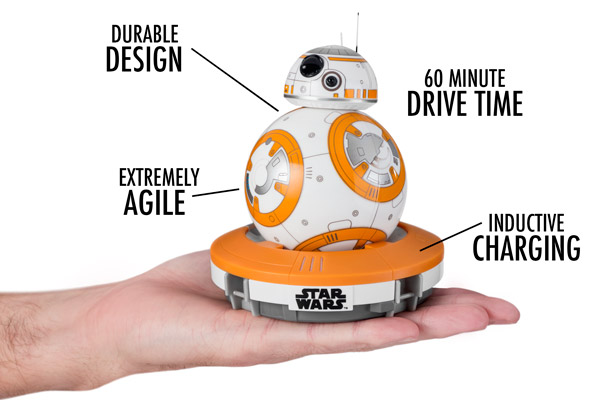 You don’t plug in any of your other friends, so why would you plug in BB-8?

BB-8 is not just another remote controlled toy. In addition to all the other cool stuff he can do, he can listen to your voice and respond.

Say, “OK, BB-8,” to get him listening, and then give him one of nine voice commands. Tell him to explore, go to sleep, run away, or just ask him how he’s feeling. He’s programmed to respond accordingly by following orders or using body language and a series of chirps. 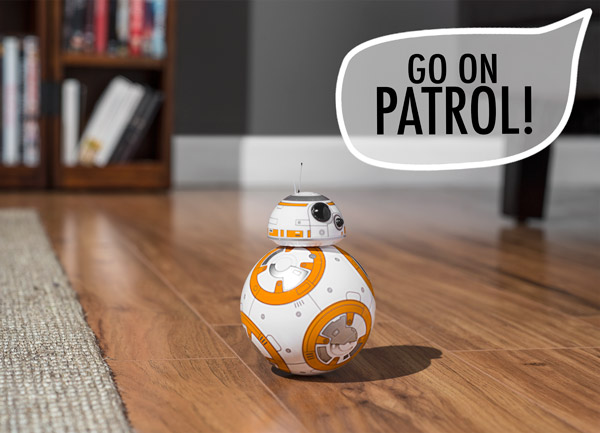 Watch BB-8 take cover when you exclaim, “It’s a trap!”

BB-8 is the complete package

As a licensed Disney toy made by the geniuses who created Ollie and Sphero, BB-8 was made with amazing attention to detail. The high-quality gift box contains BB-8 himself, an inductive charging base, and a USB cable to give the charging base power. 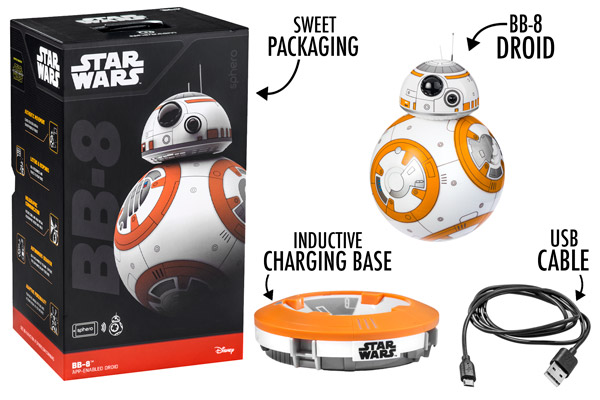 Question: So where are the hidden wheels?

Answer: BB-8 doesn’t use wheels to move. His body is a rolling ball. However, his domed head does have a pair of wheels that help it balance and articulate atop his body.

Answer: You can steer BB-8 around, but he does more than just drive. He can also roll in programmed patterns, freely explore an area on his own, and respond to voice commands.

Question: How does the head stay on top?

Answer: While it would be easy to explain away as the Force, BB-8’s head attaches to the rest of his body via magnetism. Sophisticated engineering allows his head to remain on top and rotate even as his body rolls.

Question: Wow, so this thing really is amazing! Can it copilot my star ship?

Answer: He sure is amazing, but this particular droid is better suited as a terrestrial companion than braving the vacuum of interstellar space.

Question: How can I watch footage of Vat19 staff checking out BB-8 for the very first time?

Answer: That's an amazing question with an even more amazing answer: just click the play button below!