Challenge a friend to StrataSphere 3D, a turn-based puzzle game that plays in three dimensions.

The player who’s first to strategically move the sliders and collect all of their spheres claims victory. But that’s easier said than done.

After taking turns strategically positioning your sliders, you’ll move each tri-segmented slider one position per turn in order to get all four of your marbles to run from the top to the bottom of the box before your opponent. Be careful—moving a slider might also make your opponent’s marbles drop, so you’ll need to strategize on a different level to win this challenge!

In StrataSphere, the mental match begins the moment you take the game out of the box.

Because the initial game setup is an integral part of your strategy, you immediately have to plan your path to victory. And since play happens on four different levels, you’re going to have to think in new dimensions. 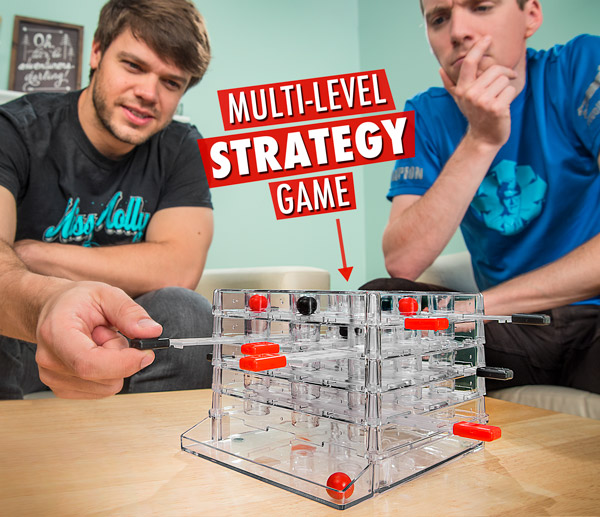 Do drop the ball.

Race to the bottom

In Stratasphere, your objective is to slip your six sliders in or out in order to get all of your balls to fall to the bottom before your opponent. It sounds simple, but the planning involved is incredibly complex. 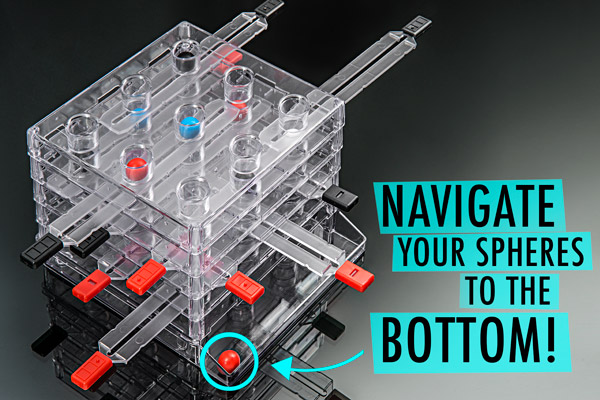 This game is amazeballs.

The game of Stratasphere is played in three distinct phases.

First, players take turns inserting the various perforated sliders into the game grid. Since the sliders have holes in different spots, keeping track of the pitfalls is paramount.

Next, players take turn inserting their color of ball—red or black—into the wells on the top of the grid.

Finally, you and your opponent will alternately slip the sliders one position in or out, ideally dropping your balls closer to the tray at the bottom, while simultaneously blocking your opponent from doing the same.

StrataSphere begins before it starts.

Designed for strategists eight and up, StrataSphere includes everything you and a friend need to play the game: the grid, six red sliders, six black sliders, four red balls, and four black balls.

As a bonus, the set also includes three blue and one white ball, which can be used to play a 2-or-3 player game variant called AtmoSphere.

So challenge a friend and start strategizing! 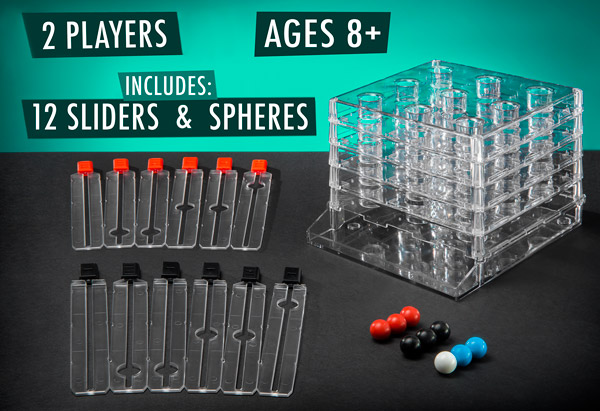 Question: What is the purpose of the blue and white marbles?

Answer: These additional marbles are used for a game variant described in the instruction manual.

Question: How many people can play the game?

Answer: The original rule set allows for a two player turn-based game. Using the additional blue and white marbles, you can play with either two or three players.

234-piece puzzle is only 4 inches across!