Tinysaurs are do-it-yourself miniature paper models so small that they can stand on the head of a U.S. quarter.

To build these prehistoric creatures, first pop out the "bones" from the laser-etched paper card. Then, follow the simple illustrated instructions to assemble the pieces.

No special tools are required, although we recommend a pair of tweezers and a bit of household glue.

A fun project that takes about 30 minutes per model, Tinysaurs are sturdy enough to stand on their own. Made in the US and are available in a variety of models.

Tinysaurs are tiny, indeed! The "giant" of the group is a mere two inches tall and the smallest design is less than an inch tall. Each skeletal model is made from a piece of laser-cut paper (similar to card stock) smaller than a matchbook.

Simply punch out the pieces (an easy task due to the laser etching) and follow the illustrated instructions to assemble the diminutive models. 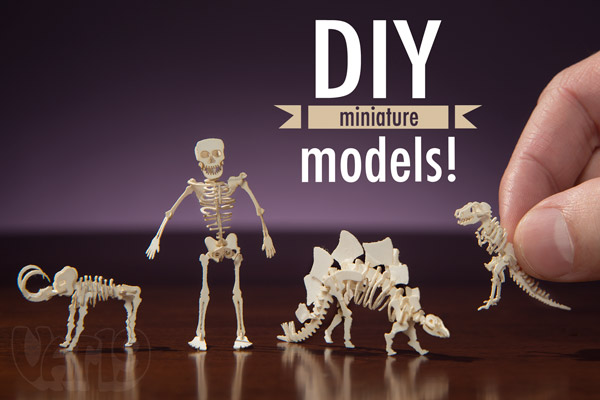 Create miniature skeletal models out of a laser-cut paper card.

All of the pieces of the model are laser-etched on to a paper card that is only about two inches square!

Due to the precise nature of laser cutting, popping out the pieces is no problem. All of the "bones", no matter how thin, release in one piece without any tearing or frayed edges. 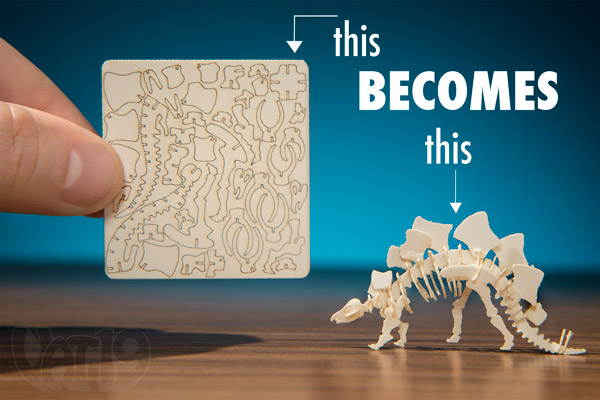 A small sheet of laser-cut paper is transformed into an impressive (in a tiny way!) skeletal model.

Impressive detail at a small scale

Frickin' laser beams, y'all! Interestingly, you can thank Albert Einstein for Tinysaurs. Back in 1917, Einstein theorized the possibility of the laser 43 years before technology caught up to his vision.

Today, lasers are used for a wide array of applications including precision machining and cutting. In the case of Tinysaurs, it is the laser that makes it possible to create amazing detail on a micro scale. 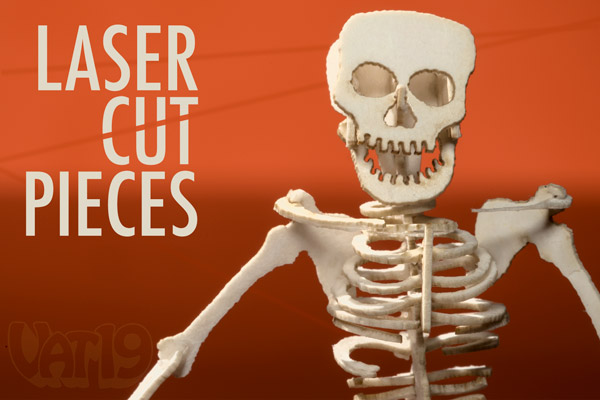 Tinysaurs are made from laser-cut pieces of card paper that are easy to pop out and fit together.

Just add glue (and maybe a pair of tweezers)

Tinysaurs are precisely cut so that each piece connects perfectly. This accurate fit and finish coupled with clear and simple instructions make assembly fun and easy. Simply add a bit of household glue to each piece to cement the model together. Due to its small size, however, we suggest using a pair of tweezers to make your model-building a bit easier. 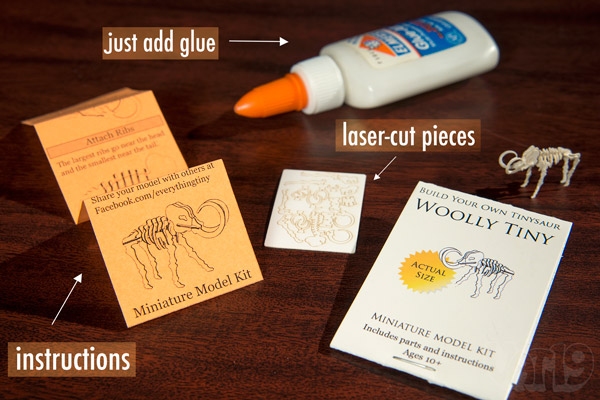 No special tools required! Just a bit of household glue is all you'll need.

Tinysaurs are available in a variety of styles.

Question: How long do they take to put together?

Answer: It depends on the model, but generally speaking it takes about 30 minutes to build one.

Question: Are they fragile?

Answer: The paper is a fairly rigid card stock and the completed models are sturdy. They easily stand on their own. That being said, please do not step on them.

Question: Why are there a woolly mammoth and a human skeleton? They're not dinosaurs!

Answer: You're right; humans and woolly mammoths are not dinosaurs. So, here's the deal with the name. The designers named their creation after they fashioned a few dinosaurs. Over time, they wanted to add other interesting models (such as the human and woolly mammoth). By then, of course, the name Tinysaurs had stuck.

Multi-cultural art projects from around the globe.

Thirteen projects for your next rainy day art-venture.

Art on a Shoestring DVD

Over a dozen art projects on a shoestring budget.