Solar System Marble Set: Collectible set of solar objects formed in glass.
Valentine's Day is coming! You can still get your order in time! Click here for more details. Ignite an awe for outer space and share the wonders of the universe with the Solar System Marble Set.

The Solar System Marble Set shrinks planets down to a size you can hold. Made from tough glass spheres, the planetary set lets everyone experience the universe in a new way.

Since they’re small enough to pinch between your fingers, you can demonstrate the orbits of the planets just as easily as you can play for keepsies.

Touch the sky.
(Please note that Jupiter has changed slightly since this video was made.)

When viewed from a telescope, the planets of our Solar System have been described as beautiful little marbles. And now, they actually are!

Each astronomical object is represented as a glass sphere with a unique size and striking swirling pigment. The stunning planet’s or star’s paint job impresses without having to use a telescope.

Enjoy these works of art-stronomy.

Map to the stars 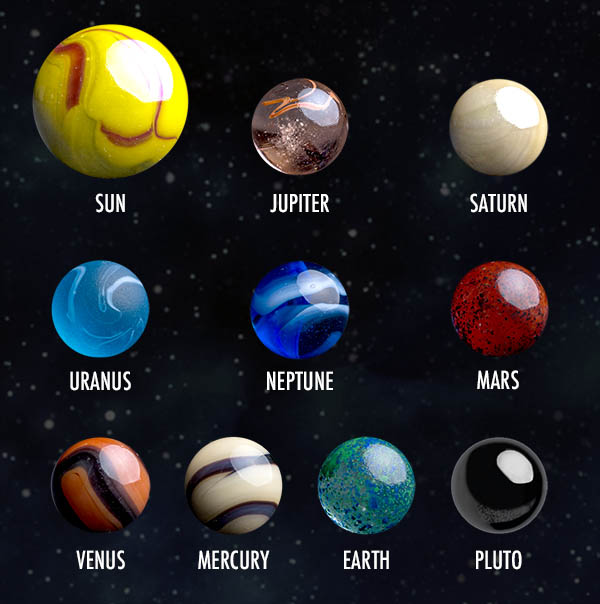 Question: Why did you include Pluto?

Answer: We didn’t make the marble set, but it isn’t specifically a planet set (it also includes the Sun). Pluto is a popular dwarf planet that’s still an important object in the Solar System and also has historical significance, previously being recognized as a planet.

Question: Is it scientifically accurate?

Answer: Each marble is a rough likeness of the astronomical object it represents, but the marbles are not to scale relative with one another as that would require a sun "marble" with a diameter 109 times larger than that of the Earth marble. Woah!

Build Your Own Stonehenge

A mini model of the ancient monument.