Thanks to its magnetic clasp, you can snap it onto your keyring and carry it with you always. Then when you get that dreaded low battery alert, plug in your phone and juice up.

Since inCharge is available with either an Apple Lightning or a micro USB connector, it's compatible with almost every smart device on the market. At just 1-3/4” long and a little over 1/4” tall, you’ll hardly notice it’s with you until you need it.

The efficiently designed inCharge is the exact size needed to get power from a standard USB port to your smart device and not a millimeter bigger. That means you can carry it in your pocket or bag to charge your phone wherever and whenever. Take more photos, use more Internet, and stay more connected. Power to the people! 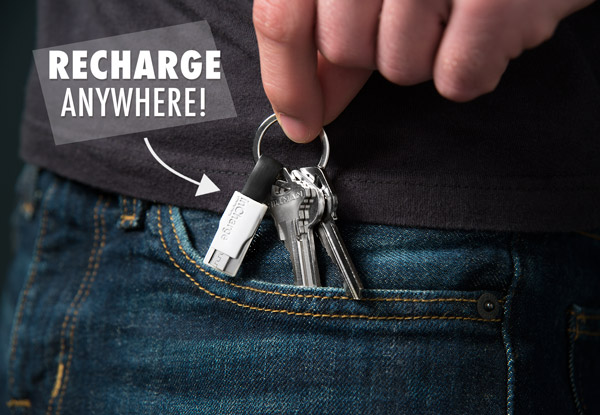 Carry a charger in your pocket.

Unless you live in the jungle, a lack of electricity is not what keeps your phone from staying charged. The problem is getting the power that’s already all around you into your phone’s battery. That’s where inCharge saves the day.

When you see that dreaded low battery warning, unclasp the tiny magnetic cable, plug one end into a nearby power source, plug the other into your phone, and let out a sigh of relief.

Charge on the go.

A lot of thought went into the little bitty inCharge, and it shows. The flat-yet-flexible ribbon cable is less than two inches long in total. That’s long enough to charge your phone and short enough to make it easy to carry. It’s incredibly easy to whip out your inCharge, too, since a magnetic clasp keeps it securely attached to a flat keyring. 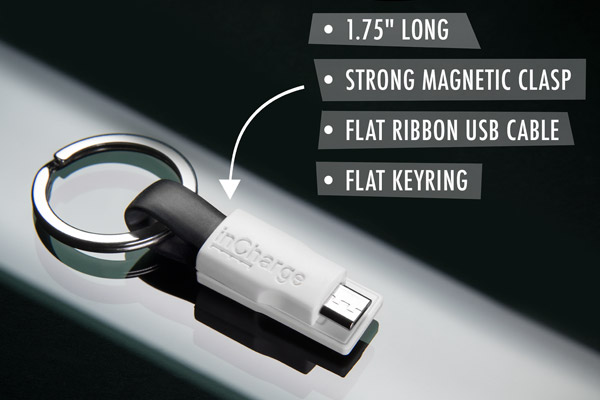 It’s so good yet so small.

Some of the most exciting apps for phones are exclusive to one operating system or another. Luckily, inCharge does not believe in OS discrimination. For Apple iPhones, pick up a lightning cable. For Android and other devices, grab a micro USB cable. Both styles provide the same folded form factor to make a compact charging cable that you’ll want to carry all the time. 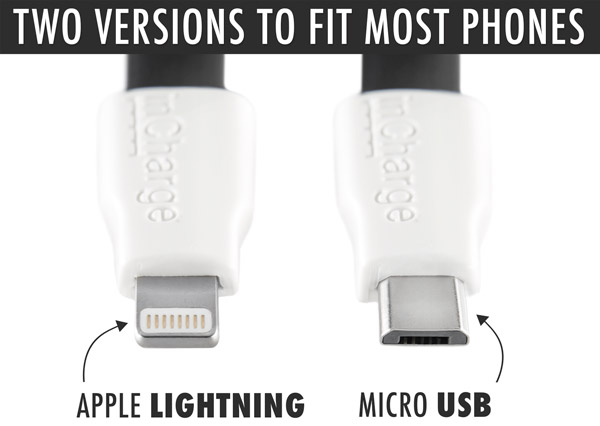 Question: What’s on the non-phone side of the cable?

Answer: All versions of inCharge are tipped on one end with a short, rectangular standard Type-A connector, which is the most universal kind of USB plug. It will connect to just about every computer or wall charger.

Question: Would the magnetic clasp ruin my phone?

Answer: No, inCharge has been designed to not disrupt your phone.

Question: What is the battery capacity?

Answer: InCharge is not a battery. It is a handy cable for connecting your phone or other device to a power source such as a computer or wall charger.

Answer: We currently only carry Apple Lightning and micro USB versions of inCharge.

Question: Can it transfer data?

Answer: Yes, both the Lightning and Micro USB versions will transfer data in addition to carrying power.

A scraper that keeps your BBQ grate clean.