Electronic game that shocks the player for wrong answers. The Number Guessing Shock Game is an exciting electronic toy that zaps you for being wrong. The anticipation of potential punishment will keep you on your toes as you enter numbers into this game with two different modes.

Share the fun in Guess the Number mode to narrow down a number that the computer has picked. The player who accidentally picks the same number chosen by the computer is in for a hair-raising shock of electricity.

Or play Sam Says, a pattern matching game in the same vein of Simon Says. Memorize the increasingly long string of numbers and correctly enter them or you'll be shocked to discover that you were incorrect.

Putting yourself at risk of electric shocks seems more like an enhanced interrogation than amusement. But the Number Guessing Shock Game is electrifying entertainment that delivers on the promise of its name.

Put your hands on the handles, covering the sensors, and let the computer choose a number. It will give you a range to select from, and you nervously enter your guess, hoping you don’t pick the same number as the computer. The size of the number range shrinks as you pass back and forth with another player, anticipating the voltage surge as you key in number after number. Eventually, one of you will enter the exact number the device was "thinking of", and you'll be rewarded with a jolt of electric juice!

It seems like such a simple game wouldn't hold your attention. But the anticipation of the negative consequence will have you positively riveted to this shocking handheld device.

The computer will give you a range, say between 6 and 70. If you guess 50 and the mystery number chosen by the computer is smaller, it will give you a new range (6-49). The game progresses until you or your opponent enters the chosen secret number. Then it's ZAP! Try to hold onto the Number Guessing Shock Game as it delivers a payload of voltage into your hands. Then restart a new round for more fun! 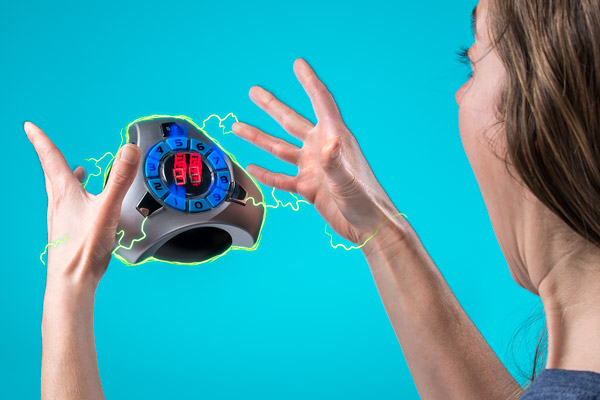 The Number Guessing Shock Game's namesake mode is designed to be played by two people alternating their turn at holding the device and guessing. But if you didn't warn your friend of the consequences before they lost the round, you might find yourself going stag for the next time.

Luckily, there's a one-player game that's just as nerve-wrackingly fun and just as shocking. In Sam Says (a Simon Says variant) you must enter an ever-growing sequence of digits to parrot the computer. If you mess up, then you're accordingly punished with a stinging snakebite of power.

The Number Guessing Shock Game allows you to change the punishment between one of three different consequences: normal shock, high shock, and sound-only.

If you're a glutton for punishment, raise the stakes by switching to high shock mode for a more intense buzz. Or if you've just gotten a Brazilian blowout and don't want to spend the rest of the day looking like Einstein, choose sound-only to be jolted by an alarming tone that won't give you a physical sting at all. Each of the modes is powered wirelessly with three included AAA batteries. 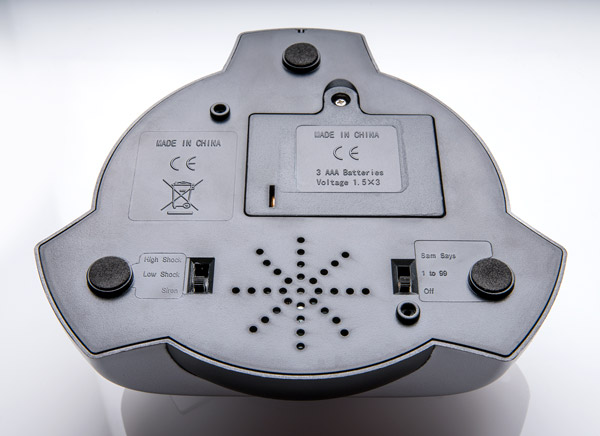 We asked (and then gently coerced) four members of the Vat19 video team to test the Number Guessing Shock Game on the highest setting. It's definitely an entertaining watch. Enjoy!

Question: Is it deadly?

Answer: Of course not! However, if you know you have a heart condition, the anticipation might not be healthy, so you could sit it out or play with the sound-only mode.

Question: Why would you want to get shocked?

Answer: Most people don't want to get shocked, but knowing that it's a possibility raises the stakes and makes the number guessing game more fun. Plus, maybe you get to watch your friend get shocked!

Foul-smelling putricant will clear any room.

Hot potato with a shocking twist.