For close quarters rubber band melees, reach for the DIY Rubber Band Pistol, a compact six-shooter from the same mad geniuses that gave us the Rubber Band Shotgun.

The semi-automatic design allows for precision shooting as well as the rapid-firing of all six rubber band "bullets".

Whether your foe be a line of aluminum cans or a platoon of plastic army men, the DIY Rubber Band Pistol will neutralize the threat up to 20 feet away.

Each easy-to-build kit (no tools or glue required!) includes 100 rubber bands and a practice target.

Sometimes you don’t need to bring out the big guns to get the job done. The semi-automatic DIY Rubber Band Pistol is powerful yet compact, so when your rubber band battles go guerilla, you’ll be prepared.

The six rubber bands waiting for your itchy trigger finger fly up to 20 feet to take out stationary targets or neutralize a moving one. 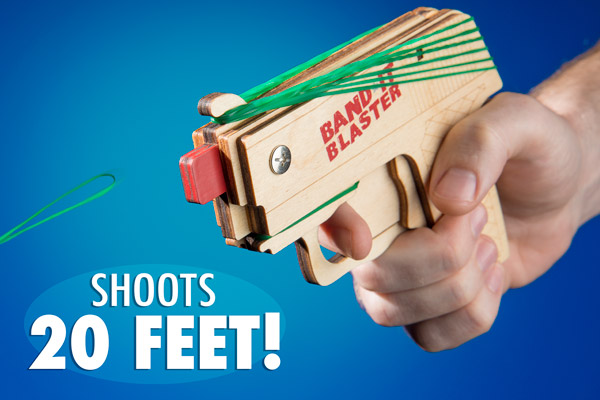 In modern warfare, time is always of the essence. The DIY Rubber Band Pistol gets you outfitted in no time with simple assembly.

Just fit the laser-cut pieces of wood together and use a coin or screwdriver to fasten them with the included metal screws. A single rubber band tensions the trigger to give it a responsive action. 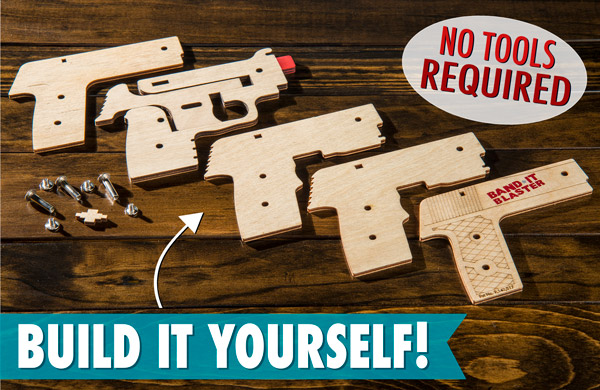 Lock and load up six rubber bands into the front hook of the gun and then stretch them individually into the grooves located at the back of the gun. A pull of the trigger will fire off a single shot while also moving the next round into the “chamber”. 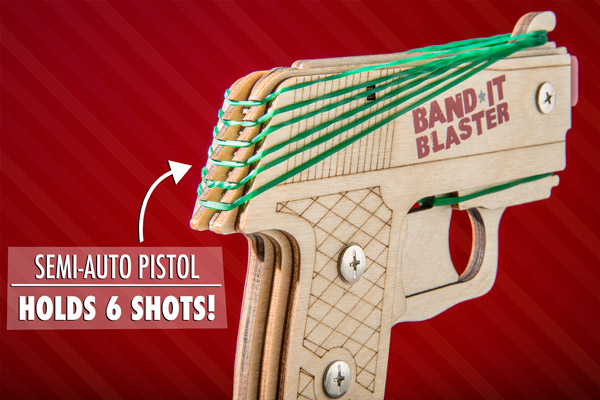 When you empty the clip and are ready for another round, we’ve got you covered. Each DIY Rubber Band Pistol includes 100 rubber bands, keeping you armed to the teeth.

If you finally run out of the provided ammo, refills are only a click away with another round of 100 rubber bands. 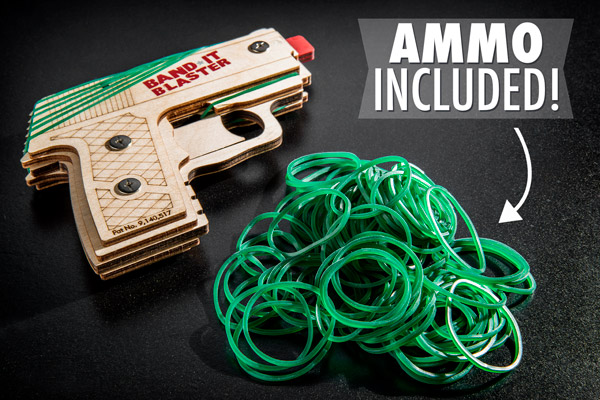 Question: Can I shoot all the rubber bands at once?

Answer: While you can load them all in one groove, they won’t fire accurately or very far since they will clog the firing mechanism.

Question: Will these rubber bands work with the Rubber Band Shotgun?

Answer: The rubber bands included with the pistol are smaller, so they’re more likely to snap when used with the shotgun.

Shoot marshmallows up to 40 feet!