An ink pen that packs a potty punch. Put the ink in stink with the Fart Fighters Pen. Topped with a smiling 3D poo emoji, not only can this fully-functioning ink pen help write an essay or sign an important contract, but it can also throw farting fists of fury!

Each time you press a lever on the back, the coordinating boxing glove springs forward to deliver an awful blow (and an awfully hilarious farting or fighting sound effect).

Although they don't actually emit a smell, you'll feel like you're in the midst of a rest stop bathroom (or maybe in the midst of an all-out brawl) thanks to the different laugh- and retch-inducing sounds, be they cheesy action movie POWS! or cut-the-cheesy FARTS!

Of course, farting and fighting are infinitely more funny with a friend, so be sure to pick up a second pen (they come in different styles, you know) to spar against each other or fight side-by-side against politeness. Oh, and between bowel-ripping battles, be sure to use the ballpoint to sign some important business documents. 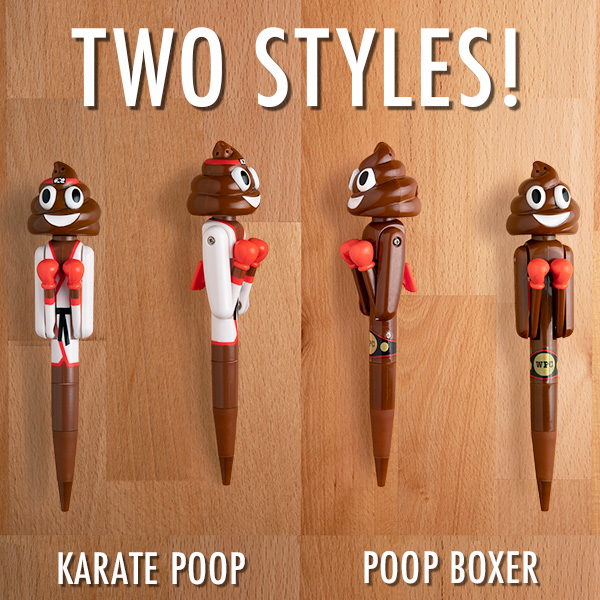 Combine the strength of loud gas, the power of a punch, and the might of a pen into one awesome apparatus: A Fart Fighters Pen.

Whether you've been disciplined in the martial art of Kung Poo or practiced throwing heavy-hitting haymakers that'll knock the wind out of your backside, these hilarious writing utensils will back up your strong words with a 1-2 punch (and a sonic blast of flatulence too)!

Of course, these 3D sculpted poo emojis function like normal ballpoint pens. But you can also press one of the two levers on the back to jab the boxing gloves forward, accompanied by either an action-movie POW! or a clear-the-room fart sound.

Punch up your prose with Fart Fighters Pens.

Question: How do you get the arms to punch?

Answer: Pull down on the levers on the back of your Fart Fighters Pen to get either the left or right arm to swing forward in a jab.

Question: Is it battery powered?

Answer: Yes! Your Fart Fighters Pen comes with batteries installed, and every time you press the mechanical trigger on the back, the speaker makes either a farting or fighting sound.

A blade for slicing human feces.

A soft toy that makes fart sounds when chewed.